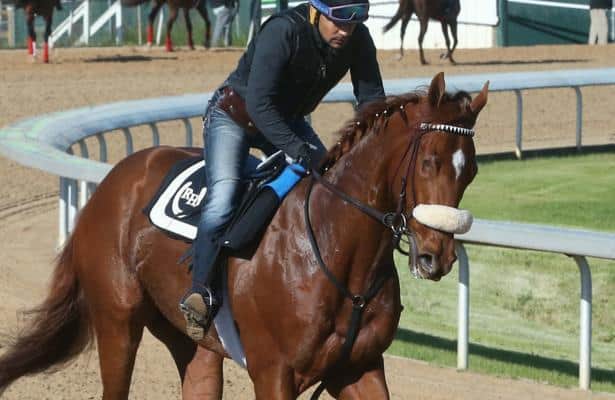 One of the feel-good stories of this year’s Kentucky Derby did not feel so good after one-eyed Finnick the Fierce struggled home seventh in the Grade 2 Blue Grass Stakes at Keeneland on July 11.

At the time, co-owners Dr. Arnaldo Monge, a veterinarian with Hagyard Equine Medical Institute in Lexington, and Rey Hernandez, a former jockey who trains the gelding, thought a top four Blue Grass finish was imperative if they were to have enough qualifying points to make the usual 20-horse Derby field.

RELATED: The horse of a lifetime — twice

Finnick the Fierce, who lost his right eye to a congenital cataract, had the misfortune of drawing inside in post two for the Blue Grass. To make matters worse, he started poorly, putting him and new pilot Jose Ortiz in a difficult position.

“In the Blue Grass, he got a lot of dirt in his good eye, his only eye,” said Monge.

As they turned for home, the youngster still launched a bid. Then he flattened. Since he was unable to add anything to the 25 Derby qualifying points he earned previously, that seemingly left him on the outside looking in.

Monge and Hernandez considered taking one last shot in the Aug. 9 Ellis Park Derby. They decided that was asking too much of a well-traveled horse that has faced stiff competition since early this season and made six starts, winning one with a pair of third-place finishes for earnings of $108,400. His most encouraging result was a third-place finish behind Nadal and King Guillermo in the saltier of two divisions of the May 2 Arkansas Derby.

Hernandez backed off Finnick in his training after the Blue Grass, adopting a wait-and-see approach to the Run for the Roses. Through injuries and defections, the Dialed In gelding gradually moved up the leaderboard until the trainer received a most welcome call from the Churchill Downs racing office. They had cracked the top 20.

When Hernandez shared the big news with Monge, the veterinarian replied, “Rey, you make the decision. I don’t want to stop your dream.”

Since Finnick flashed potential as a 2-year-old by placing second in the Kentucky Jockey Club at Churchill Downs — Tiz the Law came in a troubled third in the Jockey Club for his lone defeat — Monge has been guided largely by his faith.

“God has a plan, I guess, and you can’t question destiny,” Monge said. “He made the Derby, so we’ll find the best way we can to get him ready.”

Finnick is based at The Thoroughbred Center in Lexington, Ky. With Hernandez aboard, he has worked twice since the Blue Grass. The first drill was dazzling, the second not at all. He tore through four furlongs in 47 seconds flat on July 29, topping all 43 workers at the distance. Hernandez did not ask for much at all when he clocked 52.80 for four furlongs on Aug. 13, last of 43 workers.

“I freshened him and I’m pretty happy with how he’s training,” said Hernandez. “We’ll see what happens.”

Finnick began his season by hitting the road for a pair of starts at Fair Grounds, taking fourth in the Lecomte Stakes and seventh in the Risen Star Stakes. He continued to be a road warrior with his next two starts at Oaklawn Park, both with Martin Garcia aboard. He won an allowance optional claimer when the horse that finished first was disqualified for interference. Then came a determined effort in the 1 1/8-mile Arkansas Derby, which suggested he can compete with elite members of his class on his best day.

The Arkansas Derby rally as a 62-1 outsider would seem to bode well for the Derby, at least from a distance standpoint. “It shouldn’t be any problem with the distance,” Hernandez said. “It should be in our favor.”

With Jose Ortiz opting to remain in New York because of the pandemic, Hernandez is working on reuniting Finnick with Garcia. “It looks like he’ll be the pilot,” he said.