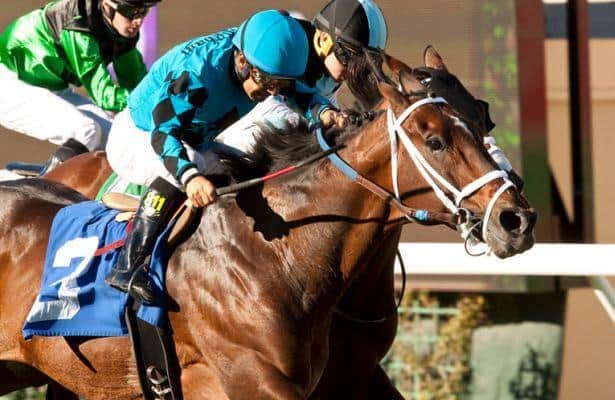 Graded stakes winner Finnegans Wake and Patrioticandproud are set to meet once again in Saturday’s 63rd running of the San Marcos Stakes as a competitive field of nine older horses have signed on to run 1 ¼ miles on turf.

Finnegans Wake will be looking for his third straight graded stakes victory Saturday. First in Del Mar’s Grade II Hollywood Turf Cup at 1 ½ miles two starts back Nov. 27 where he beat Patrioticandproud by a neck, the two hooked up again in the Grade II San Gabriel Jan. 3 at Santa Anita where Finnegans Wake won by a length, once again just besting Patrioticandproud.

Though 10th to Eclipse Award Champion Grass Horse and Older Male of 2014, Main Sequence in the Breeders’ Cup Turf Nov. 1, Finnegans Wake hasn’t been worse than second in his other three starts since being acquired by trainer Peter Miller in September.

Owned by Donegal Racing and Rockingham Ranch the 6-year-old horse by Powerscourt will break from the rail under Victor Espinoza. He is 26-5-3-3 overall with earnings of $945,375.

Owned by Eclipse Thoroughbred Partners and Gary Barber, the 6-year-old Proud Citizen gelding is 27-4-10-4 overall with $492,605 in earnings.

Neil Drysdale will be represented by both Power Ped and Power Foot. Power Ped, a last- out winner of the Cotton Fitzsimmons Mile Turf Handicap Jan. 17 at Turf Paradise was third in the San Gabriel Jan. 3.

The 5-year-old gelding by Powerscourt has two wins, two seconds and two thirds over Santa Anita’s turf course. Owned by Stepaside Farms, LLC, he is 18-4-5-2 overall with $274,432 in earnings.

Armed with a new rider in Hall of Famer Mike Smith, Sean McCarthy’s Majestic Harbor will attempt to turn his luck around Saturday after a four race losing streak. The Grade I Gold Cup winner from June 28, Majestic Harbor will try turf for the first time since an allowance try at Del Mar in August, 2012 in which he ran third.

Flatter: Some of racing’s bad habits are really hard to break
Caution: Some facets of horse racing may be habit...
x