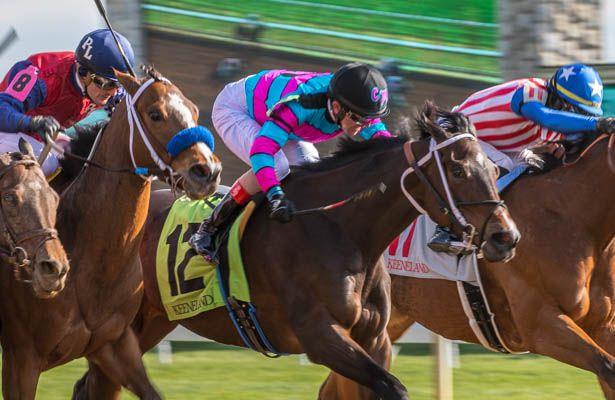 Photo: Nedim Slijepcevic
Carl Moore Management’s Finley’sluckycharm pressed a rapid pace set by American Gal, took over in upper stretch and then held off Miss Sunset by a nose with Lewis Bay another nose back to win the 17th running of the $300,000 Madison (G1) for fillies and mares Saturday afternoon.
Other graded stakes winners Saturday afternoon were Churchill Downs Racing Club’s Warrior’s Club in the 32nd running of the $250,000 Commonwealth (G3) and Wesley Ward’s Bound for Nowhere in the 22nd running of the $200,000 Shakertown (G2).

Trained by Bret Calhoun and ridden by Brian Hernandez Jr., Finley’sluckycharm covered the 7 furlongs on a fast main track in 1:22.82. It was the seventh Keeneland stakes victory for both and their first in the Madison.

“Unbelievable," Calhoun said. "This was a great one for us. She’s been very deserving of a Grade 1 (win), and we’re so happy to get it here at Keeneland.”

Here’s a look at the photo finish for the win in the Madison (G1) at #Keeneland! pic.twitter.com/VQAPXnGkJL

A Keeneland sales graduate, Finley’sluckycharm is a 5-year-old Kentucky-bred daughter of Twirling Candy out of the Victory Gallop mare Day of Victory.
The victory was worth $180,000 and improved Finley’sluckycharm’s earnings to $788,368 with a record of 15-10-3-0. Last fall, she won the Thoroughbred Club of America (G2) here.
American Gal set torrid fractions of :21.96 and :44.31 with Finley’sluckycharm in closest pursuit. The top two raced that way until the top of the stretch when Miss Sunset loomed up three wide.
By midstretch, the trio was joined on the outside by Lewis Bay, Ami’s Mesa and finally Salty in the charge to the wire that came up in time for Finley’sluckycharm.
Finley’sluckycharm returned $13.80, $7.20 and $4.60. Miss Sunset, ridden by Julien Leparoux, returned $8.20 and $4.60 with Lewis Bay paying $3.40 to show under Irad Ortiz Jr.
Finishing a head back in fourth was American Gal, who was followed in order by Salty, Ami’s Mesa, Tequilita, Ms Locust Point, Natural Wonder and Teresa Z.
Longshot Warrior’s Club Hangs on to Win Commonwealth
In the Commonwealth, Warrior’s Club emerged from a five-horse scramble in deep stretch and then held off favored Limousine Liberal by a neck to complete the 7 furlongs on the fast main track in 1:22.61.
Warrior’s Club gave trainer D. Wayne Lukas a second victory in the race to go with Orientate in 2002. For jockey Luis Contreras, the victory was his first Keeneland stakes victory.
The victory was worth $150,000 and increased his earnings to $518,504 with a record of 22-5-4-4.
A Keeneland sales graduate, Warrior’s Club is a 4-year-old Kentucky-bred son of Warrior’s Reward out of the Citidancer mare Thirty Eighth St.
Westwood set the early pace with Conquest Windycity in closest pursuit and Warrior’s Club tracking the top two through fractions of :22.40 and :45.15.
The top two remained unchanged to the top of the stretch when the field closed in with Warrior’s Club and Awesome Saturday moving to the front while Limousine Liberal rallied between horses to place second.
Warrior’s Club returned $48.80, $16.20 and $8. Limousine Liberal, ridden by Corey Lanerie, returned $3.20 and $2.60 with Awesome Saturday finishing another neck back in third under Brian Hernandez Jr. and paying $5 to show.
It was another 1¼ lengths back to Behavorial Bias in fourth with Westwood, Conquest Windycity, Heartwood, First Premio and Crewman following in order.
Bound for Nowhere Romps in Shakertown
In the Shakertown, Bound for Nowhere collared the pace-setting Latent Revenge at midstretch and drew off to win by four lengths over Bucchero and complete the 5 ½ furlongs on a turf course rated as soft in 1:03.77.
Wesley Ward, who trains Bound for Nowhere, earned his second Shakertown victory following his 2016 win with Undrafted. Julio Garcia, who has ridden Bound for Nowhere in all four of his U.S. starts, picked up his third Keeneland stakes victory and first in the Shakertown.
A Keeneland sales graduate, Bound for Nowhere is a 4-year-old Kentucky-bred son of The Factor out of the Alydeed mare Fancy Deed. The victory was worth $120,000 and increased Bound for Nowhere’s earnings to $214,275 with a record of 6-4-0-0. His lone losses have come against Group 1 company in Europe.
Latent Revenge rocketed out to an early advantage and maintained a daylight lead down the backstretch with Bound for Nowhere in closest pursuit. On the far turn, Garcia sent Bound for Nowhere after the leader, drew on even terms approaching the eighth pole and easily pulled away.
Bound for Nowhere returned $19, $9.40 and $4.80. Bucchero, ridden by Fernando De La Cruz, returned $8 and $4.20 with favored Disco Partner rallying for third another 2¼ lengths back under Irad Ortiz Jr., and paying $2.80 to show.
Commute finished another half-length back in fourth and was followed in order by Latent Revenge, Kid Perfect, Loose On the Town, Big Handsome, Will Call, Zapperini, Tombelaine and Mooose.
Warrior's Club Miss Sunset Finley'sluckycharm Lewis Bay American Gal Salty Bound For Nowhere Ami's Mesa Brian J. Hernandez, Jr. W. Bret Calhoun Keeneland Madison Madison (2018)