Finite rallies to another Grade 2 score in Chilukki 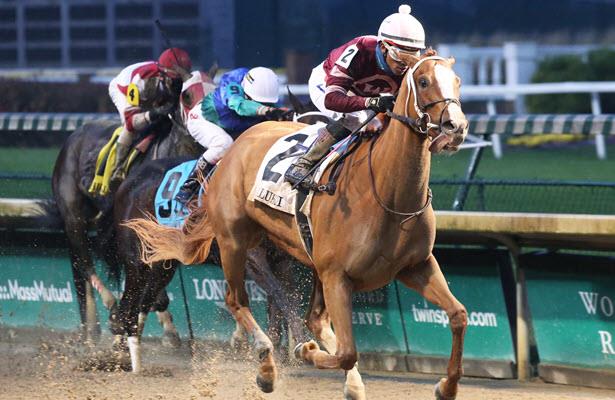 Finite added a third Grade 2 tally to the resume on Saturday when launching from well off the pace to win the Grade 2, $100,000 Chilukki Stakes going a one-turn mile at Churchill Downs.

Finite — who had dropped two previous starts since returning from ankle surgery in September — was sent postward as the 6-5 favorite following a narrow loss to Venetian Harbor in the Oct. 17 Raven Run (G2) at Keeneland. With Ricardo Santana Jr. in the irons, Finite was content to sit near the rear of the nine-horse field as Risky Mandate ushered the field through sharp opening fractions of 22.75 and 45.59 for the opening half mile.

Racing well off the rail and in the clear, Finite began to cut into the lead on the turn and had drawn on even terms with both Risky Mandate and 10-1 Sanenus near the quarter pole. In the drive for the wire, Risky Mandate started to fade and while Sanenus fought on stubbornly, the class of Finite ultimately prevailed as she grinded away to kick clear in the late going to win by 2 1/2 lengths.

Finite completed the trip in 1:35.53 while paying $4.40. Sanenus was followed across the wire by Whoa Nellie and Gold Standard.

“We had a great trip rating behind the pace,” Santana said. “I think at this stage of her career she is just getting better. She’s only 3 years old, and today was her first time against older horses. We went one turn today, but she’s maturing and going to be really nice at longer distances, too.”

Trained by Steve Asmussen, Finite had a five-race winning streak from September 2019 to this past February, which included victories in the Golden Rod (G2), Rags to Riches, Silverbulletday and Rachel Alexandra (G2). After a disappointing fourth-place finish in the Fair Grounds Oaks (G2) as the heavy odds-on favorite in March, the daughter of Munnings underwent ankle surgery that kept her on the sidelines for nearly six months.

“She’s a really quality filly,” said Asmussen, who also won the 2007 Chilukki with Rolling Sea. "We had a really nice win last year at Churchill in the Golden Rod and going one-turn in the Rags to Riches. ... It was a disappointing race in the Fair Grounds Oaks and after that is when this year was sort of turned upside down. "

Finite is owned by a partnership of breeder Winchell Thoroughbreds, Thomas Reiner, William Dickson and Deborah Easter. She was a $200,000 auction purchase last year as a 2-year-old. Finite improves her record to 11: 6-3-1 with more than $750,000 in earnings.

Noting that Finite is still without a Grade 1, Asmussen said a trip west for the La Brea (G1) at Santa Anita the day after Christmas would likely be next for the filly.