Finite much the best in Fair Grounds' Rachel Alexandra 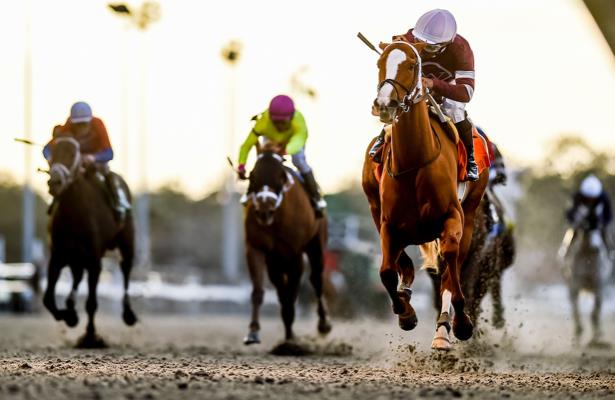 Finite’s defined as "having limits or bounds." The name may not fit for this filly.

The Steve Asmussen-trained daughter of Munnings delivered her fifth straight victory Saturday — four of those have been in stakes company — as an easy winner of Fair Grounds’ Grade 2, $300,000 Rachel Alexandra Stakes.

With the victory and an additional 50 Kentucky Oaks qualifying points, a healthy Finite’s essentially assured a spot in the May 1 race at Churchill Downs.

Finite stalked a pace set by longshot His Glory, who went opening panels of :24.20 and :47.92. The Winchell Thoroughbreds, LLC homebred ranged up three-wide through the turn and drove by for a four-length score over British Idiom, the reigning 2-year-old champion filly making her first start since winning the Breeders’ Cup Juvenile Fillies.

Finite finished up 1 1/16 miles in 1:43.97 under jockey Ricardo Santana Jr. for a win that returned $7.40. She’s campaigned in partnership by Winchell Thoroughbreds, Thomas Reiman, William Dickson and Deborah Easter.

“She was feeling so good today,” Santana said. “She put me in the spot she wanted to be, and I was just being a good passenger. When I turned for home, she gave me a nice finish-up.”

Behind British Idiom, Swiss Skydiver and Tempers Rising rounded out the top four finishers, with those three receiving Oaks qualifying points on a 20-10-5 basis. British Idiom now owns 50 points on the Oaks trail, second only to Finite’s 70.

The local series of races for 3-year-old fillies concludes with the $400,000 Fair Grounds Oaks (G2) on March 21. Asmussen said the plan is to bring Finite back for that event, which runs six weeks before the Kentucky Oaks.

Summerly and Untapable, two Asmussen trainees who won the Kentucky Oaks, also followed the Fair Grounds trail to the first Friday in May.

“We know the importance of running here at the Fair Grounds,” Asmussen said. “I think it’s obvious the series here and what it’s meant to the fillies the last several years.

“We’re trying to create similar circumstances to Summerly and Untapable. I think today was a step in the right direction.”