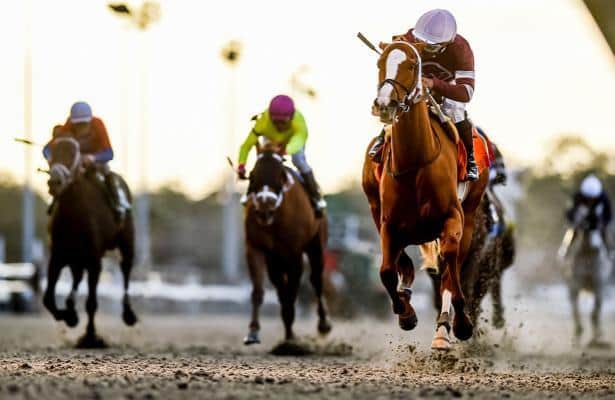 Fillies and mares will be in the spotlight Tuesday, with three stakes headlining the penultimate card of the Kentucky Downs meet, which was rescheduled from Sunday. The $400,000 Untapable Stakes for 2-year-old filly sprinters and $400,000 Music City Stakes for 3-year-old filly sprinters are new this year, with the $500,000 TVG Stakes at 1 5/16 miles in its 10th running.

Kimari, scratched out of Saturday’s $500,000, Grade 3 Real Solution Ladies Sprint, is the 3-1 favorite, with trainer Wesley Ward also entering her in Wednesday’s closing-day feature, the $500,000 Franklin-Simpson (G3) against males. In two starts this year, Kimari won Oaklawn Park’s Purple Martin in the slop then was a rallying second after being left at the start in Royal Ascot’s Commonwealth Cup (G1) in England. Kimari was one of the top 2-year-old turf sprinters of either sex.

Winchell Thoroughbreds’ Finite, who stamped herself as one of the best of her generation over the winter, comes in off almost a six-month layoff following the surgical removal of a bone chip after a fourth-place finish in the Fair Grounds Oaks (G2). After winning a Kentucky Downs maiden race a year ago in her only start on turf, Finite reeled off four stakes victories on dirt, capped by the Rachel Alexandra (G2) in New Orleans.

The Shug McGaughey-trained Enola Gay, winner of Keeneland’s Appalachian (G2) at a mile before finishing fifth in the 1 3/16-mile Saratoga Oaks, shortens back to sprinting over the course where she won her debut last year. She’s My Type, trained by Christophe Clement, won Saratoga’s $100,000 Coronation Cup in her last start and never runs a bad race.