Barn Tour: Find out the plans for 11 of Asmussen's horses 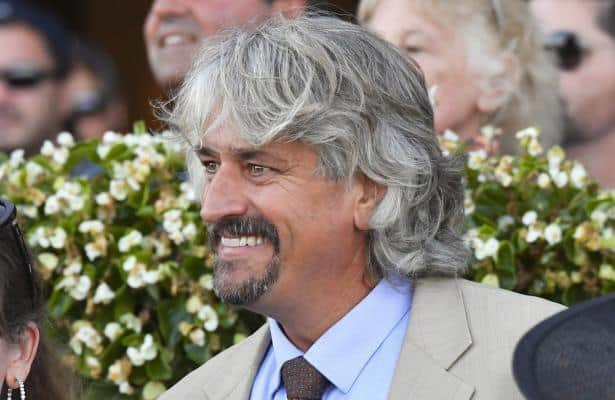 Springtime felt closer to normal for Steve Asmussen. After the annus horribilis of COVID, the Hall of Fame trainer looked and sounded right at home this week while he watched some of his horses training in the sunshine at Keeneland.

“What a pleasant year this has been considering all the variables of last year,” he said.

“Pleasant” includes victories. This year he has 261, the latest coming Thursday at Indiana Grand. His career total of 9,390 puts him 55 from the late Dale Baird’s North American record.

“We obviously realize how hard any win is,” Asmussen, 55, told Horse Racing Nation and the VSiN racing podcast in a Barn Tour on Wednesday. “Anxious to get there once you get this close.”

Midnight Bourbon was responsible for two of those wins. Although his troubled, sixth-place finish May 1 meant Asmussen is still looking for his first Kentucky Derby victory, an impressive second-place finish to Rombauer in the Preakness Stakes had the Hall of Fame trainer saying “all major 3-year-old races are under consideration for the rest of the year.”

After skipping the Belmont Stakes to give the 3-year-old Tiznow colt a break, Asmussen confirmed Midnight Bourbon will be aimed for either the Haskell (G1) on July 17 at Monmouth Park or the Jim Dandy (G2) on July 31 at Saratoga.

“Midnight Bourbon will work this Sunday again at Churchill,” Asmussen said, “then most likely travel after that to Saratoga with the stable.”

As for other standouts in his stable, some race Saturday before Churchill Downs is closed to replace the turf course this summer. Others are being prepped to race in the Midwest and the East.

Jackie’s Warrior. The long-ago futures favorite for the Kentucky Derby has since proven himself more adept at one-turn races. He was 5-for-5 in those before he lost by a neck to Drain the Clock in the seven-furlong Woody Stephens (G1) early this month at Belmont Park. “The race didn’t go as we had hoped,” said Asmussen, who offered that as shorthand for all the bumping that cost Jackie’s Warrior about two lengths at the start. “But he came out of it in good shape. He will travel to Saratoga with the stable this week as well.” No target was mentioned, although the 6 1/2-furlong Amsterdam (G2) for 3-year-olds on Aug. 1 might be a candidate.

Clairière. When she finished fourth in the Kentucky Oaks, it was the first time the 3-year-old Curlin filly finished out of the money in five career starts. She comes back as the 9-5 second choice on the morning line for Saturday’s Mother Goose Stakes (G2) at Belmont Park. “She is a fabulous filly with I think as regal a pedigree as you can have,” Asmussen said. “We’re excited anytime we get to run her.” Chad Brown’s 2-for-2 filly Always Carina is the favorite for the race that Asmussen has won four times. “The Mother Goose has been extremely good to us,” Asmussen said. “Hopefully that trend continues.”

Silver State. The 4-year-old Hard Spun colt is the hottest horse in the barn. He ran his winning streak to six with his one-length score this month in the Met Mile (G1) at Belmont Park. “He works Sunday at Churchill,” Asmussen said. “We’ll go to Saratoga on Monday with the Whitney (G1) as a possibility.” That 1 1/8-mile race for older horses is Aug. 7, possibly setting up a rematch with By My Standards, the Met Mile runner-up.

Super Stock. He was the 12-1 winner of the Arkansas Derby (G1), 16th in the Kentucky Derby and fourth May 31 in the Texas Derby. Appropriately enough, the Dialed In colt is being aimed by Asmussen for the Iowa Derby on July 2 at Prairie Meadows.

Pauline’s Pearl. Asmussen said the Tapit filly who finished eighth in the Kentucky Oaks will keep Super Stock company at Prairie Meadows and race July 2 in the Iowa Oaks (G3).

Cowan. Still looking for a victorious encore to his debut win, the 3-year-old Kantharos colt “is still on a break” after finishing second in the Feb. 20 Saudi Derby and 10th in the Al Quoz Sprint (G1) at Dubai. Asmussen did not have a next race in mind yet for Cowan.

Arm Candy. Still only a maiden and allowance winner, she is a 12-1 long shot drawn wide in post 13 for the Tepin Stakes, the turf mile that will be the finale Saturday at Churchill Downs. “She’s a quality, 3-year-old, Twirling Candy filly that ran a very competitive third in the Hilltop last time out on the Preakness week undercard,” Asmussen said. “The timing for this race is good. As per usual, I expect a solid run from her.”

Red Run and Vodka N Water. These 2-year-olds will represent the stable in Saturday’s six-furlong Bashford Manor (G3) at Churchill Downs. Red Run, a colt by Asmussen’s champion Gun Runner, is 7-2 on the morning line. “Red Run is a very nice colt that won his only start,” Asmussen said. “I think will continue to improve and do better as the races get longer.” Vodka N Water, who is by Fed Biz, is 6-1 after finishing second in each of his three starts, including a 2 1/2-length loss to Saturday’s favorite Glacial. “Vodka N Water is a seasoned 2-year-old that has kept very good company and deserves this opportunity,” Asmussen said.

Tizplenty. The 2-year-old filly by Speightstown is the 4-1 co-second choice to trainer Norm Casse’s Onetheonesandtwos to win Saturday’s Debutante Stakes at Churchill Downs. “She’s a half to Mr. Money,” Asmussen said, “and the ‘Tiz’ comes from her mother’s side (damsire Tiznow). Obviously, she’s a well-bred filly that has already had success at Churchill and another very fast horse for (long-time clients) the Heiligbrodts.”

At his current pace of about 1 1/2 wins a day, Asmussen could break Baird’s nearly 14-year-old record before the end of next month. Asked if he had started to think about it more and more, Asmussen laughed.

“I’ve done a little more than start to think about it,” he said. “The significance of being the all-time leading trainer in a game that’s been so good to me is extremely meaningful.”

But asked if he considered how it will feel when he finally reaches that summit, Asmussen said, “I think that the reflection in racing is for later.”