Filly who bolted to the highway last year breaks her maiden 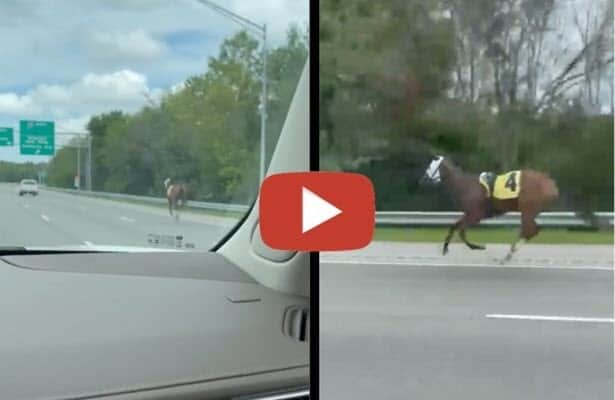 A filly who had an adventurous August as a 2-year-old broke her maiden Monday in a six-furlong maiden special weight at Thistledown.

Bold and Bossy, unraced as a juvenile, unseated her rider and got loose Aug. 21, 2021, from Ellis Park. She made her way to a series of highways, including US 41 and Interstate 69. Horsemen eventually tracked her down, and neither she nor her jockey were seriously injured.

Just in: Ellis Park officials tell Eyewitness News a race horse bucked its rider and escaped the track before the first race this afternoon. It traveled along US-41 before the owner managed to rescue it at the Evansville Water Department. pic.twitter.com/YWbaklhDaO

Before dawn the next day, a fire destroyed a receiving barn at Ellis Park, causing minor burns to Bold and Bossy.

Bold and Bossy is much brighter this morning (Tues). Cream was removed and she looks very well. A couple of dime sized burns, but nothing over her back. Her back is swollen, but that will dissipate. Bruised left hind sole. Much brighter today - and had some turn out time early! pic.twitter.com/KZR2go9tDt

Now 3, Bold and Bossy appears to have recovered fully. She made her first start on July 5 at Belterra, finishing third for trainer Michael Ann Ewing and owner Bantry Farms. Her next start came Monday at Thistledown. Under jockey Malcolm Franklin she stalked the pace, battled between horses in upper stretch and edged away to beat favorite Purdy Pumpkin by a length in the six-furlong event.

Remember Bold and Bossy, the filly who got loose before her debut at Ellis Park and ran down the interstate, then survived a barn fire?

She just broke her maiden at Thistledown, winning in her second start for @bantryfarms.