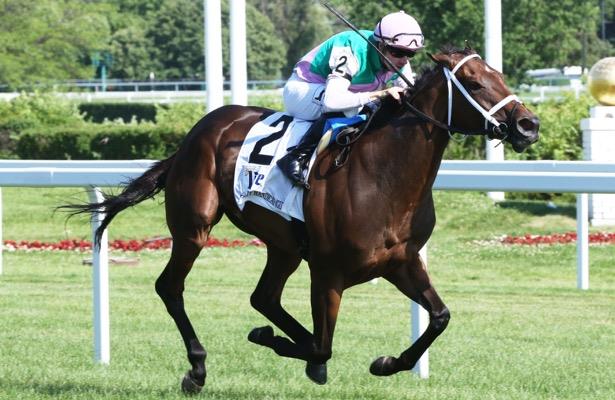 Juliet Foxtrot drew away from the field in Saturday’s Grade 3, $150,000 Modesty Handicap, which was run at 1 3/16 miles on the Arlington International turf course.

A field of nine fillies and mares were sent to post in what was the first graded stakes on the Ride To Million Day card.

A Juddmonte Farms homebred, Juliet Foxtrot broke well from post two and secured a one-length lead going around the first turn in a :23.91 first quarter.

Down the backstretch, she maintained her lead with jockey Florent Geroux guiding her through a :49.01 half mile.

Turning for home she fought off a brief challenge from odds on favorite Simply Breathless, before drawing away and winning clear.

“She’s had two starts with us so far and we were always really high on her,” winning trainer Brad Cox said. “We think a lot of her, and we think she’s got the talent to do some good things the rest of this year.”

Juliet Foxtrot was a graded stakes winner in Ireland as a 2-year-old in 2017.

Since arriving to the Brad Cox barn in North America, she is now a perfect three for three.

The Modesty Handicap was her first graded stakes victory of 2019, and she now owns a career record of 11-4-0-0.

The connections of Juliet Foxtrot have no immediate plans for her next race yet but are hopeful that she can move her way up throughout the rest of 2019.

Juliet Foxtrot returned $5.60 to win. Rounding out the top three were Vexatious and Simply Breathless.