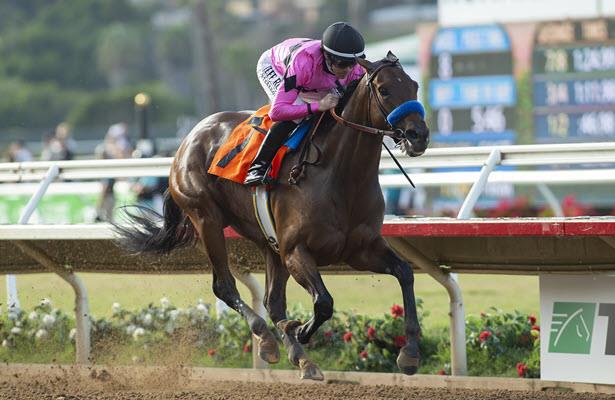 Gary and Mary West's homebred Fighting Mad continued her ascent in the older distaff division with a gate-to-wire win by a half length in the Grade 1, $250,000 Clement L. Hirsch Stakes at Del Mar on Sunday, earning an all-expenses paid berth into the Breeders' Cup Distaff later this year.

Trained by Bob Baffert and ridden by Abel Cedillo, Fighting Mad was dispatched as the 9-5 favorite in a talented six-horse field based off her similar front-running score last out in the May 31 Santa Maria Stakes (G2) that included Hirsch rivals Ce Ce and Hard Not to Love, among others.

Fighting Mad caught a flyer out out of the gate in the 1 1/16-miles Clement Hirsch and proceeded to usher the field through fractions of :23.15, :46.55 and 1:10.57 for six furlongs with defending Hirsch champion Ollie's Candy tracking in second followed by Ce Ce.

Ce Ce, a multiple Grade 1 winning-homebred for Bo Hirsch -- Clement Hirsch's son -- made a three-wide move on the second turn to draw into contention, but failed to go on when flattening out in the stretch. Fighting Mad continued to motor on the lead down the lane and while a game Ollie's Candy did manage to cut into the lead, it wasn't enough. Fighting Mad crossed the wire a half-length in front of Ollie's Candy with Ce Ce finishing a distant third.

Baffert and Cedillo combined for another stakes win a day after teaming with Thousand Words in Saturday's Shared Belief, which propelled the winner to the Kentucky Derby. Last weekend, they partnered with the Wests and won the San Diego Handicap (G2) with Maximum Security.

“I had the same instructions today that I had yesterday -- get her out of there and see if you can get to the front," Cedillo said. "She really broke sharply and wanted to go right away. I got her to relax some on the backside, then she went right on with it. She’s just an amazing filly.”

Baffert noted there were some anxious moments prior to the start.

“I was a little bit worried about her because she was getting pretty warm in the paddock," Baffert said. "But Abel knows her pretty well and he knows speed is her weapon."

A 4-year-old daughter of New Year's Day, lightly-raced Fighting Mad improves her record to 8: 5-1-0 and the $150,00 winner's share boosts her earning to $444,008. She made a lone start at 2 in 2018 -- a debut win in August at Del Mar -- and didn't resurface until the following spring when winning an allowance at Churchill Downs. Fighting Mad made three more starts last season, including an eight-length romp in the Torrey Pines (G3) at Del Mar to close the season.

Fighting Mad kicked off this season with a third going six-furlongs in the Desert Stormer before her breakthrough win when stretched out for the Santa Maria.

"To look at her you wouldn’t think she could go (a distance), but when she started opening up, I figured he must know what he’s doing. Basically, she ran them off their feet," Baffert said. "The way she acted in the paddock, she ran an incredible race. She was trembling and sweating and I was worried, but once the race started she was pretty serious. ”

Fighting Mad is the fourth filly or mare to earn a spot in the $2 million Breeders' Cup Distaff, which is scheduled for Nov. 7 at Keeneland. The others to win a Breeders' Cup Challenge race are She's a Julie (Ogden Phipps), Vexatious (Personal Ensign) and Midnight Bisou (Fleur de Lis).