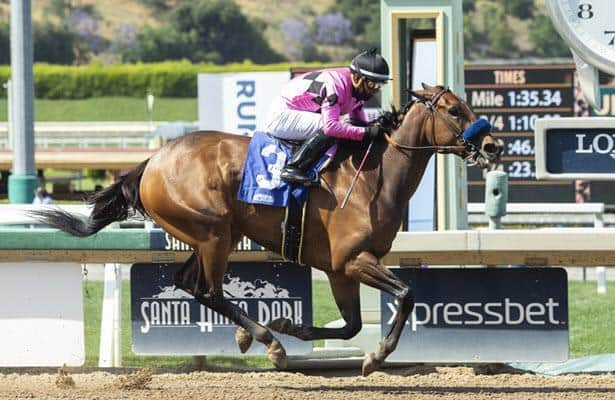 Gary and Mary West's homebred Fighting Mad shot to the front and was never challenged when springing a 10-1 upset in the Grade 2, $200,000 Santa Maria Stakes at Santa Anita Park on Sunday.

In a race billed as a rematch between Grade 1 winners Ce Ce and Hard Not to Love, Fighting Mad raced alone on the lead through an opening half mile in :46.49 and six furlongs in 1:10.09. CeCe, the odds-on favorite following consecutive Grade 1 wins, made a bid on the far turn but couldn't catch Fighting Mad before flattening out in the stretch.

Fighting Mad kept to her task under Abel Cedillo and easily held off the belated rally of Hard Not to Love to earn her second graded stakes win by 3 1/4 lengths. She provided trainer Bob Baffert with his fifth Santa Maria win, tying Ron McAnally and Charlie Whittingham for most all time.

“When she broke, she broke like a rocket, so I was just trying to slow her down,” said Cedillo, who was aboard for the first time and who picked up his meet-leading 10th stakes win. “I know I went a little fast, but she did it on her own."

A 4-year-old daughter of New Year's Day, Fighting Mad won the Torrey Pines Stakes (G3) at Del Mar last August in what would be her final start of the season. She kicked off this season by running third behind Bellafina in the May 17 Desert Stormer (G3) at Santa Anita.

"She needed her last race and she had trained well coming into this,” said Baffert. “We’ve always been high on her and today, I told the jock to put her on the lead, that’s where she wants to be.

"She can be a little headstrong, but I could see turning for home, I knew she was gonna be tough to beat," Baffert added. "Today, she ran like she did at Del Mar, that’s a really good time on this track.”

The start of the Santa Maria was delayed when Hard Not to Love, a filly with one eye who is known to be quirky, stood on the track and refused to make her way to the gate. An assistant starter eventually was sent to gather Hard Not to Love and walk her to the gate. Often a front-runner, she broke dead last under Victor Espinoza before rallying for second.

“I think the long post parade, it seemed like she let down a little, like maybe her energy dropped," Espinoza said. "She was okay going into the first turn, then she wasn’t herself today.”

Horologist, trained by Richard Baltas and ridden by Flavien Prat, appeared to go wrong at the top of the stretch and did not finish.