Fighting Mad a ‘serious filly’ with a Grade 1 target next 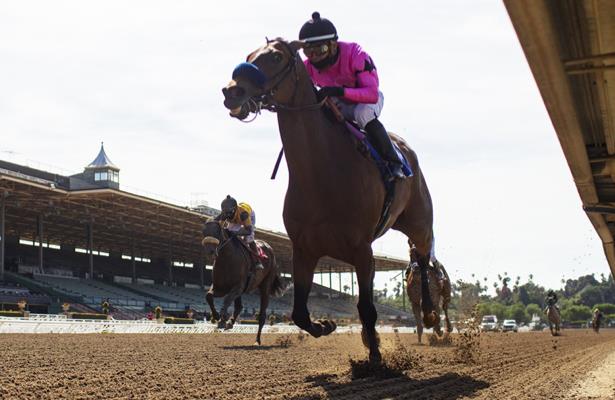 Last summer, Bob Baffert stretched Fighting Mad to a mile for the first time, and she responded by drawing off to win Del Mar’s Torrey Pines (G3) by eight lengths.

“There was no other race to run her in — an allowance race won’t fill — so I put her in there and figured she would control the pace, and it worked out,” Baffert said. “She’s a really serious filly.”

The Gary and Mary West homebred won her fourth race in seven starts during a stop-and-start career. Having succeeded on debut in August of 2018 at Del Mar, Fighting Mad didn’t run again until the following April. She returned to the sidelines after that Torrey Pines victory, too.

“When I stretched her out at Del Mar, I was thinking big things with her,” Baffert said. “She came out of with a little muscle ache or something. She wasn’t right, so I stopped on her.”

In her graded return, Fighting Mad was disqualified from third to fourth in Santa Anita’s May 17 Desert Stormer (G3). She clipped heels at the start and brushed a rival in the stretch of an eventful trip.

“The race the other day was sort of a disaster,” Baffert said. “She went way too fast, bumped a horse — it was just an erratic race. She came back and worked nice and easy.”

Then it was out to 1 1/16 miles in the Santa Maria, a race Fighting Mad won on the front end. Setting opening fractions of 23.25 seconds for the quarter mile and 46.49 for the half, she stretched her winning margin to 3 1/4 lengths under jockey Abel Cedillo.

“I really think she’s better at two turns,” said Baffert, who will look next to Del Mar’s Clement L. Hirsch (G1) next on Aug. 2. “Some horses are better when they have the speed to get away from them.”