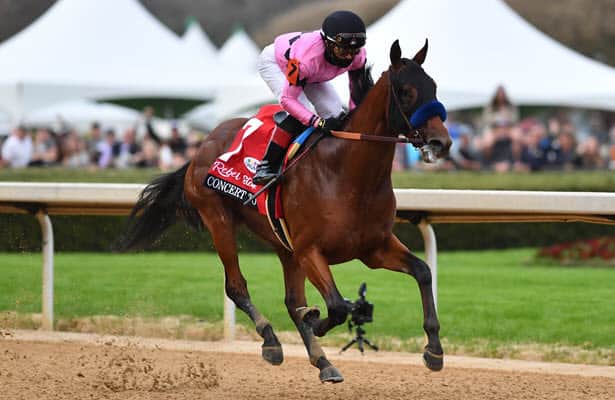 Concert Tour was one of the 2021 Kentucky Derby trail’s top prospects when he won the Grade 2 Rebel Stakes last March at Oaklawn Park. Now at 4, he returns to Oaklawn for a new trainer looking for his first win since that race.

The Street Sense colt Concert Tour is the 5-2 morning-line favorite for the $150,000 Fifth Season Stakes. Post time is 4:46 p.m. EST, with TVG showing the one-mile race for 4-and-up runners.

Brad Cox now trains Concert Tour, who made all five of his previous starts for trainer Bob Baffert. Last year, he won Santa Anita’s San Vicente Stakes (G2) and the Rebel but settled for third in the Arkansas Derby (G1) as an odds-on favorite, then finished ninth of 10 in the Preakness Stakes.

The Preakness was Concert Tour’s final start of his 3-year-old season. The Gary and Mary West homebred returned to training in October for Cox, gearing up for a 4-year-old campaign.

Jockey Joel Rosario gets the call Saturday on Concert Tour. Rosario returned Friday to ride for the first time since suffering a rib injury Dec. 2 at Aqueduct.

Mucho (7-2) for trainer John Ortiz is the second choice on the morning line. The stakes winner enters off a last-out, local allowance score Dec. 18.

Necker Island (9-2) finished ninth in the 2020 Kentucky Derby. The Chris Hartman-trained runner scored three wins last year as a 4-year-old, and was fourth in his most recent start, the Thanksgiving Classic Stakes on Nov. 25 at Fair Grounds.

Long Range Toddy (10-1) won the 2019 Rebel at Oaklawn, two starts before Maximum Security was ruled to have interfered with him coming around the far turn of the Kentucky Derby. The Rebel was the 6-year-old’s last victory, and he enters on a 0-for-16 drought dating nearly three full seasons.

Trainer Steve Asmussen has a pair of Fifth Season starters in Snapper Sinclair (6-1) and Silver Prospector (10-1). The latter most notably upset Tiz the Law in the 2019 Kentucky Jockey Club Stakes (G2) at Churchill Downs.

Asmussen won the Fifth Season last winter with Silver State, who went on to take the 2021 Oaklawn Handicap (G2) and Metropolitan Handicap (G1).

Here is a look at the field for the 2021 Fifth Season Stakes (trainer and jockey in parentheses) with morning-line odds:

TimeformUS’ pace projections show Mucho going out to an early lead under jockey Florent Geroux, followed by Thomas Shelby. Favorite Concert Tour is projected to sit behind that duo.

Here is a look at some of the other stakes races taking place Saturday across the U.S. All post times are EST, with races broadcast by TVG.

Cattin (2-1), a Neolithic colt, looks for the second stakes win of his career in the Pasco, a race that leads into Tampa’s duo of Kentucky Derby-points paying preps: the $250,000 Sam F. Davis (G3) on Feb. 12 and the $400,000 Tampa Bay Derby (G2) on March 12. Jockey Samy Camacho rides the last-out winner of the local Inaugural Stakes on Dec. 4 for trainer Ralph Nicks. Todd Pletcher trains Provocateur (3-1), a $600,000 auction purchase who broke his maiden on third asking Dec. 23 at Tampa. Cyberviking (7-2), a former maiden claimer, enters off back-to-back wins for trainer Jorge Delgado, including in a New Year’s Eve allowance race at Gulfstream Park.

Straight Up G (4-5) enters off back-to-back wins, including in the King Glorious Stakes on Dec. 12 at Los Alamitos. Jockey Ricardo Gonzalez gets the call on the Straight Fire colt, who Richard Baltas trains for Jim Rome’s Jungle Racing. Walther Solis trains Finneus (5-2), a state-bred stakes winner who as second last out in the King Glorious. Fast Draw Munnings (4-1) was third in that race for trainer Jeff Mullins.

Professors’ Pride (5-2) brings a 2-for-2 record into the Cal Cup Oaks for trainer Eddie Truman. Jockey Umberto Rispoli gets the call Saturday aboard the Bayern filly, winner of Los Al’s Soviet Problem Stakes on Dec. 10. Phil D’Amato trains Rose Dawson (7-2), a debut winner Dec. 5 at Los Al. Big Novel (4-1) was second in the Soviet Problem and another Cal-bred stakes for trainer John Sadler.

Eclipse Award-winning trainer Brad Cox and nationally prominent owners Gary and Mary were opponents on Oaklawn’s 2021 Road to the Kentucky Derby. But several months after the meeting ended in May, they began collaborating and already have two victories together this season in Hot Springs.

Then with Hall of Fame trainer Bob Baffert, Concert Tour was a flashy winner of the Rebel Stakes (G2) for 3-year-olds last March – the Cox-trained Caddo River was fifth – before his unbeaten record and Kentucky Derby hopes crashed with a weakening third-place finish in the Arkansas Derby (G1) in April. Caddo River was second in the Arkansas Derby.

Concert Tour, who is unraced since a ninth-place finish in last May’s Preakness Stakes, makes his first start for Cox in the $150,000 Fifth Season Stakes for older horses Saturday at Oaklawn. The one-mile Fifth Season has drawn a strong field of nine, including three millionaires (Rated R Superstar, Snapper Sinclair and Long Range Toddy), another Oaklawn stakes winner (Silver Prospector) and Mucho, who will be making his two-turn debut.

Concert Tour, the 5-2 program favorite, has nine published workouts since Nov. 14 in advance of his 4-year-old debut. Concert Tour was entered in the Woodchopper Stakes on Dec. 27 at Fair Grounds but scratched after the race didn’t come off the grass. A forward factor early in his first five career starts, Concert Tour’s return to Oaklawn will mark his first start without blinkers. He also adds Lasix for the first time since his debut last January at Santa Anita.

Mucho came from just off the pace to capture an allowance sprint Dec. 18 at Oaklawn for trainer John Ortiz and owners WSS Racing (William Simon) and 4 G Racing (Brent and Sharilyn Gasaway). Mucho has bankrolled $686,729 in a 29-race career, but the 6-year-old son of 2010 Breeders’ Cup Classic winner Blame has never raced around two turns. Ortiz, on behalf of WSS and 4 G, claimed Mucho for $80,000 in November 2020 at Churchill Downs.

Snapper Sinclair seeks his first career stakes victory on dirt after finishing second, beaten a neck in the 2020 Fifth Season, and finishing fifth in the 2019 Fifth Season for Hall of Fame trainer Steve Asmussen and co-owner Jeff Bloom (Bloom Racing). Snapper Sinclair finished fifth in his last start, the Prairie Bayou Stakes on Dec. 18 at Turfway Park. Turfway has a synthetic surface.

“He had come out of the Breeders’ Cup in such great shape, and we didn’t really have a whole of options with him and he had yet to run on a synthetic track,” Bloom said. “We just figured, ‘What the heck? Let’s give it a try.’ It was one of his extremely rare, sort of flat performances, so we just kind of drawn a line through that one and refocus on the coming year.”

The speedy Thomas Shelby cuts back to a mile after finishing a game second behind heralded stablemate Lone Rock in the inaugural Tinsel Stakes at 1 1/8 miles Dec. 18 at Oaklawn for trainer Robertino Diodoro.

Silver Prospector, another Asmussen trainee, is seeking his first stakes victory since the $750,000 Southwest (G3) for 3-year-olds in 2020 at Oaklawn. Necker Island ran ninth in the rescheduled 2020 Kentucky Derby and returns to a route after finishing fourth in the Thanksgiving Classic Stakes on Nov. 25 at Fair Grounds for 2015 Oaklawn training champion Chris Hartman.