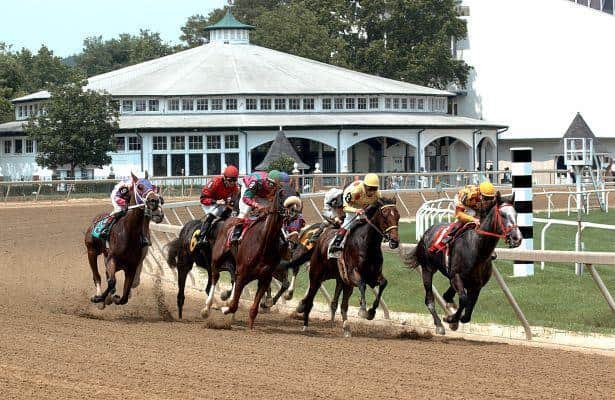 Rudy Sanchez-Salomon will continue chasing the dream when the owner-trainer sends out his claimer-turned-multiple stakes winner Shake Em Loose in search of a third straight victory and Triple Crown race berth in Saturday’s $125,000 Federico Tesio at Laurel Park.

The 41st running of the 1 1/8-mile Federico Tesio headlines a 10-race program featuring four stakes worth $450,000 in purses on the first of back-to-back Spring Stakes Spectacular Saturdays. Spring Stakes Spectacular continues April 23 with five $100,000 stakes including the first three of the season scheduled for Laurel’s world-class turf course.

Named for the noted Italian breeder, owner and trainer whose homebreds Nearco and Ribot dominate Thoroughbred bloodlines around the world, the Tesio for a seventh straight year serves as a "win-and-in" qualifier for Triple Crown-nominated 3-year-olds to the 147th Preakness Stakes on May 21 at historic Pimlico Race Course.

Debuting at Pimlico in 1981 and run there last year while Laurel’s main track underwent renovations, the Tesio returns to Laurel where it was held in 1987, 1989 and from 2016 to 2020. A total of 22 Tesio winners have gone on to run in the Preakness, the last being Alwaysmining in 2019. Maryland-bred Deputed Testamony, in 1983, is the only horse to sweep both races.

Happy Saver won the Tesio in 2020 for Hall of Fame trainer Todd Pletcher as a prelude to his next-out victory over older horses in the Jockey Club Gold Cup (G1).

Sanchez-Salomon made Shake Em Loose eligible for the Triple Crown races by nominating him before the late March 28 deadline for $6,000. The gelded son of 2013 Malibu (G1) winner Shakin It Up has won three of four starts since being claimed for $16,000 out of a maiden victory last November.

Two of those wins have come in stakes – the seven-furlong Heft at odds of 59-1 racing first time for his new connections to end 2021, and his two-turn debut in the 1 1/16-mile Private Terms March 19 over 2-year-old Maryland-bred champion Joe.

“He’s doing great. I hope he’s going to run the same as his last couple races here. I’ve been lucky and blessed, so we’ll see,” Sanchez-Salomon said. “I’m a little more confident since the last race, but you never know. It’s always another day.”

Shake Em Loose entered the stretch of the Private Terms in front and was able to fend off a rally from Joe to win by 1 3/4 lengths. In his prior start, he made a bold move around the turn to take the lead and rolled by 3 3/4 lengths in a one-mile optional claiming allowance, also at Laurel, where Sanchez-Salomon is based.

“The last race didn’t take too much out of him. He did get a little tired right after, because he had to dig down that day but, man, he fought for it. He didn’t want to get beat,” he said. “When the other horse got close to him, he switched leads and took off again.”

In his only loss since the claim, Shake Em Loose was unprepared at the start and broke in the air in the seven-furlong Spectacular Bid Jan. 29. Trailing the field at one point, he was never in contention and finished seventh.

“I schooled him a little bit different this time so he got some dirt in his face, which I don’t think he minds anyway,” Sanchez-Salomon said. “He’s doing as good as he’s ever done. Even the one he lost, that was just an unfortunate break that day.”

Charlie Marquez, aboard for the last two starts, gets a return call from Post 2 in a field of nine at topweight of 124 pounds.

“Everybody’s got these kinds of dreams. We’ll see how high we can set the expectations,” Sanchez-Salomon said. “We’re all very, very excited.”

The Elkstone Group’s Maryland homebred Joe, named for President Joe Biden, had won three straight races heading into the Private Terms including Laurel’s seven-furlong Maryland Juvenile Dec. 18. The Tesio will be his third straight try around two turns, having won impressively in his first attempt by 2 1/2 lengths Jan. 23 at Laurel.

“I don’t think the distance should bother him,” trainer Michael Trombetta said. “Being a two-turn race, and he’s done it now a couple of times, it should be to his benefit.”

Joe raced in mid-pack under jockey Victor Carrasco, trailing by 5 ½ lengths after six furlongs before launching a bid, getting to within a length and a half of Shake Em Loose at the top of the stretch. He appeared to lose momentum when the two got in close proximity near the sixteenth pole and couldn’t get by, but finished six lengths ahead of multiple stakes winner Local Motive in third.

“I think it was a combination, quite honestly, of Victor pushing him along a little bit. I don’t know if he laid in a little or the eventual winner was drifting out, or a combination of both, but it kind of was a momentum-breaker. I still don’t know that I could have beaten that horse anyway, but it might have been a little closer,” Trombetta said. “He did the next-best thing to winning.”

Carrasco, up for each of Joe’s five starts, rides back from Post 4 at 118 pounds.

“I still wouldn’t be a bit surprised if this horse doesn’t run equally well or better on turf when he gets the opportunity, but we’ll cross that bridge at a later date,” Trombetta said. “For now, we’ll just go one race at a time and see where he takes us.”

“He should be fresh and ready to go,” Trombetta said. “The last time he had a little issue … so hopefully the addition of Lasix and being back on the Laurel track he should do much, much better.”

Jaime Rodriguez is named to ride from Post 6 at 118 pounds.

The other Triple Crown-nominated horses in the Tesio are Smarten Up and Secret Alliance. Happy Tenth Stable’s Smarten Up was a nine-length maiden special weight winner last November at his home track of Parx before finishing second in the Jerome and sixth in the Withers. Most recently, he was beaten a nose when second in the 1 1/16-mile City of Brotherly Love March 8 and was runner up in a one-mile, 70-yard optional claiming allowance March 28, both at Parx.

Alexandria Stable and Carguys Racing’s Secret Alliance is a gelded son of two-time Horse of the Year and 2014 Hall of Famer Curlin that also comes in from Parx for Kentucky Derby (G1) and Preakness (G1)-winning trainer John Servis after graduating in his third try, a six-furlong maiden special weight Feb. 21 by three lengths.

“He’s very immature but very talented. He’s been dying to go two turns and I’ve been wanting to get him stretched out, and this looked like the spot,” Servis said. “I couldn’t get a long race to go for him and I just wanted to farther than a one-turn mile.”

Secret Alliance has raced exclusively at Parx, getting within a head of the lead in his Dec. 22 debut before finishing second by two lengths. He was fourth after pressing the pace to open his sophomore season Jan. 31 going 6 1/2 furlongs, his longest race to date.

“I thought he probably should have won his first start. He ran very green. He was going to the lead at the eighth pole and he ducked in behind the horse in front and the jock had to grab him,” Servis said. “His second start he broke OK and got hustled really hard and I really wasn’t happy with that race at all, so it was just kind of a throwout race. Then he came back and ran like I expected him to.

“We’ve always thought highly of him, and he’s trained like a nice horse from the get-go,” he added. “He’s matured a lot over the last 60 days. He’s only going to get better, but I think he’s ready for this test. I really do. He’s got a lot of talent.”

Frankie Pennington has the riding assignment from outside Post 9 at 118 pounds.

Completing the field are Pam and Martin Wygod’s South Street (Post 5, 118), head winner of a 1 1/8-mile maiden special weight Feb. 24 at Aqueduct for Hall of Fame trainer Bill Mott; Lugamo Racing Stable’s Baltimore Bulleit (Post 3, 118), exiting a 7 1/4-length maiden claiming triumph March 13 at Laurel for leading trainer Claudio Gonzalez; Felissa Dunn’s Vine Jet (Post 1, 120), a winner of two straight including a one-mile, 70-yard optional claiming allowance March 29 at Parx; and Emerald Racing Stable’s Noneedtoworry (Post 8, 118), off the board in the Withers and Gotham (G3) but only beaten a half-length when second to Vine Jet last out.