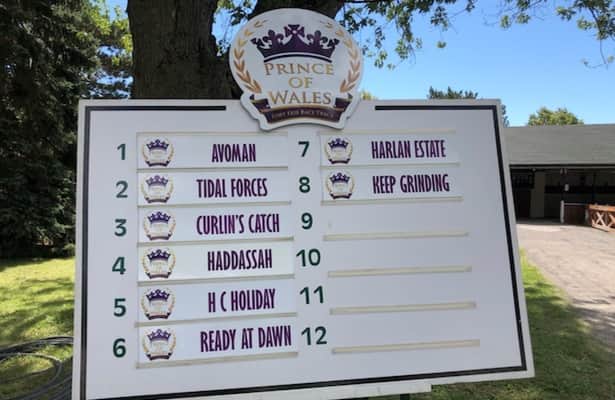 A competitive field of eight horses will take part in the 86th running of the Prince of Wales Stakes, the second jewel of the Canadian Triple Crown, at Fort Erie on Tuesday at Fort Erie.

Six of those contenders are coming off varied performances in the Queen’s Plate. The 2021 Queen’s Plate champ Safe Conduct will bypass the Prince of Wales, but H C Holiday, who placed third in the Plate, will look to improve on his performance going 1 3/16 miles over the border oval’s dirt course.

Trained by Kevin Attard, the dark bay colt is the son of Ami’s Holiday. A graded stakes winner, Ami’s Holiday was a runner-up in the 2014 Queen’s Plate and finished third in the Prince of Wales Stakes. He went onto capture the third jewel of the Canadian Triple Crown, the Breeders’ Stakes at Woodbine. His leading progeny, H C Holiday put in his final work over the Fort’s dirt course earlier this week. His conditioner is pleased with his training heading into next week’s race.

“He’s trained really well. He came out of the race (Queen’s Plate) in great shape. I thought he looked really good on the dirt training track at Woodbine. We brought him on Tuesday (to the Fort) as well and he went (1:01:20) by himself and seemed to be striding out really nice. He looked pretty smooth going over Fort Erie’s course. Obviously if he runs back to that kind of race like last time in the Plate, he will be tough to beat.”

Owned by Ivan Dalos, H C Holiday will be ridden by Luis Contreras. Contreras has piloted several horses to victory in the Prince of Wales, including Pender Harbour (2011), Amis Gizmo (2016), and Cool Catomine (2017).

“I was most surprised with him. He worked really well. He hasn’t been that great of a work horse, so he looked pretty comfortable. He went 59 and change. I’m kind of pumped about his chances. In my mind after watching him work I think his chances have increased. He came out of the work in good shape as well and he’s a horse that kind of plods along. He will need a good trip and he can’t afford to get stopped midway,” said Attard.

Meanwhile fifth-placed Plate finisher Keep Grinding will continue the grind heading into the second jewel of the Canadian Triple Crown. Trained by Tino Attard for Kevin’s son, Joshua Attard, the bay colt posted his final work at the Fort in company with Harlan Estate, going (:59:40) over the dirt.

Avoman, winner of the Plate Trial Stakes and the 2020 Bull Page Stakes at Woodbine, is looking to step up his game after a sixth-place finish in the Plate. The bay gelding will be sent out by conditioner, Donald MacRae and ridden by Antonio Gallardo.

The lone filly taking on the boys this year will be Mark Casse trainee Curlin’s Catch. The daughter of Curlin is coming off a fifth-placed finish in the Woodbine Oaks. She will be guided by veteran rider Patrick Husbands.

Looking to make waves in the Prince of Wales is Gail Cox trainee Tidal Forces. Owned by Sam-Son farm, the son of Malibu Moon finished ninth in the Plate. Woodbine-based jockey Emma-Jayne Wilson retains the mount and will pilot the bay colt around the border oval.

Ready At Dawn, conditioned by Daryl Ezra for Double Blooded Stables is the Fort-Erie based trainee. The son of More Than Ready will be the race long shot at 30-1. The bay gelding won his last start at the Fort on August 9 going seven furlongs over the turf course. The Prince of Wales Stakes at 1 3/16 miles will require the bay gelding to stretch out in distance over a different surface. His conditioner is tapping into the family lineage in order to capture the stakes race.

“I’m relying on his pedigree. His great-grandmother Dance Smartly won the Canadian Triple Crown including the mile and a half Breeders’ Stakes and his grandmother Dancethruthedawn won a multitude of stakes – the Oaks, the Queen’s Plate. The pedigree says distance so I’m going to rely on that to get us through it.”

Despite being the long shot, Ezra feels very confident about Ready At Dawn’s chances.

“I’ve done every job imaginable back here (at Fort Erie Race Track), from charting, announcing and training. I’ve seen a lot of races. We are 30-1 in the morning line, but we are as good as anything in there.”

The US$316,050 Prince of Wales Stakes is the middle jewel in the Canadian Triple Crown, for 3-year-olds foaled in Canada, running 1 3/16 over the border oval’s dirt surface. First race post time on Tuesday is 1 p.m. EDT, with the Prince of Wales race scheduled for approximately 5:35 p.m. Because of COVID-19 restrictions, Fort Erie Race Track is open to a limited number of spectators.