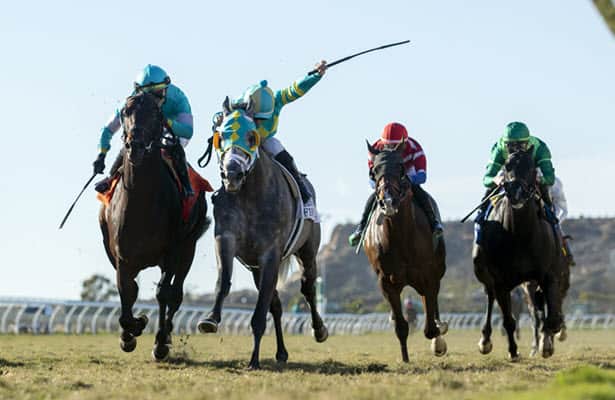 Responding to an early pull on the trigger by rider Umberto Rispoli, the gray colt Field Pass made the lead in the middle of the backstretch and then hung tough late to capture the Grade 2, $251,000 Seabiscuit Handicap Saturday at Del Mar.

The 4-year-old by Lemon Drop Kid ran the mile and one-sixteenth on grass in 1:41.85 and just held off the 9-10 favorite Sacred Life by a head at the wire. Finishing third three-quarters of a length back was Indian Peak.

“I didn’t want to stop the stride of my horse," Rispoli explained of his early move. "He was running happy and I was happy, too. He fought hard late and we got there first.”


Field Pass is trained by Mike Maker, who was scoring his first stakes victory at Del Mar. The colt earned $150,000 for his triumph and pushed his career earnings to $913,143. It was his eighth overall win in his 23 start.

“He (Rispoli) made that move yesterday (winning) on Red Storm Risen and they went 48 to the half so I figured clearly he knew more than I did," said Nolan Ramsey, Maker's assistant. "He’s one of those horses that once you make the move there’s no turning back. He’s a classy horse who has gotten the job done in a lot of places and I’m very proud of him.”