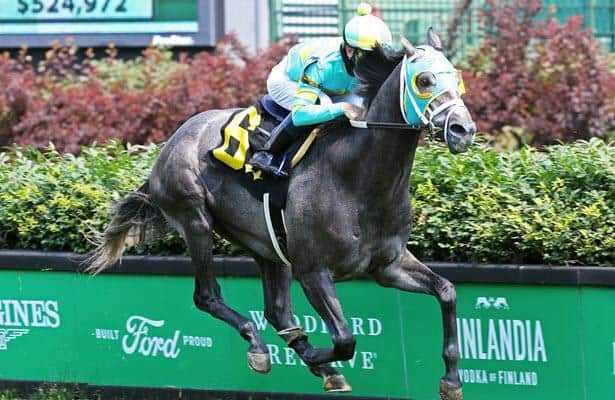 The 15th running of the one-mile BWI Turf Cup for 3-year-olds and up headlines a nine-race program featuring four grass stakes worth $500,000 in purses. Launched as the Colonial Turf Cup in 2005, it was held at Colonial Downs through 2013 before moving to Laurel Park in 2015 following a one-year hiatus. It returns after not being part of Maryland’s pandemic-shortened 2020 stakes schedule.

Field Pass has gone winless in three races this year including fourths in the Maker’s Mark Mile (G1) April 9 at Keeneland in his 4-year-old debut and last out in the 1 1/16-mile Wise Dan (G2) June 26, beaten a total of five lengths.

In between, the Lemon Drop Kid colt faded to be last of eight after pressing the pace in the 1 3/8-mile Man o’ War (G1) May 8 at Belmont Park, where he blew out three furlongs in 36 seconds Wednesday.

“He’s doing well,” trainer Mike Maker said. “He had a nice, easy work this morning and he’s ready to go.”

Field Pass has raced exclusively in graded company since running third in the American Turf (G2) last September and in nine of his last 12 starts, winning the Jeff Ruby (G3) and 1 1/8-mile Ontario Derby (G3) over all-weather surfaces at Turfway Park and Woodbine respectively last spring and fall, as well as last July’s 1 1/16-mile Transylvania (G3) on the Keeneland turf.

In 19 starts with $608,143 in purse earnings, Field Pass has raced four times at one mile with one win and one third, his victory coming in the Dania Beach on the grass at Gulfstream Park to open his 2020 campaign. Bred in Maryland by Mark Brown Grier, he was beaten a length when fourth as the favorite in the 2019 Laurel Futurity in the only previous trip to his home state.

Victor Carrasco is named to ride from the rail in a field of six at topweight of 124 pounds, two more than each of his rivals.

“I think the class relief will be the main thing. He ran good in the Maker’s Mark off the layoff so the distance isn’t a concern,” Maker said. “It’s still going to be a tough race, but he’s been hooking some tough guys lately so we’re looking forward to it.”

Other graded winners entered in the BWI Turf Cup are Pixelate and English Bee.

Godolphin homebred Pixelate earned his fifth career win and third in a stakes in the 1 1/8-mile Prince George’s County June 13 at Pimlico, getting a perfectly timed ride to edge Logical Myth by a length.

The 4-year-old City Zip colt won the Del Mar Derby (G2) and Woodchopper in 2020 and this year was beaten a nose for the win in the Henry S. Clark April 24 at Pimlico and three lengths when fifth in the $1 million Pegasus World Cup Turf (G1) Jan. 23 at Gulfstream.

“He came out of the last race great,” trainer Michael Stidham said. “It was great to get him back in the winner’s circle. He deserves it. He runs great every time.”

Calumet Farm’s English Bee, a 5-year-old homebred by turf champion English Channel, is still trying to recapture his 2019 form when he won four of eight starts including the 1 1/8-mile Virginia Derby (G3) and a pair of one-mile stakes, the James W. Murphy at Pimlico and Parx Fall Derby, all on the grass.

He hasn’t won since, finishing second twice in seven 2020 starts – beaten a half-length in the one-mile Canadian Turf (G3) at Gulfstream and a neck in the Wise Dan.

“I think he just needs some luck,” trainer Graham Motion said. “I think he’s as good as he was. He’s a hard-knocking horse.”

This year English Bee was a troubled seventh, 2 ½ lengths behind Maker-trained pacesetter Somelikeithotbrown in the 1 1/16-mile Dinner Party (G2) May 15 at Pimlico, his first race in more than seven months, and no better in the Prince George’s County.

“I didn’t quite know what to make of his last race, but he didn’t have a great trip. He certainly had an unlucky trip the first time I ran him,” Motion said. “I think he’s done well. I wasn’t in a hurry to run him back. I’d like to think he’s coming into this pretty fresh.”

Ken and Sarah Ramsey’s homebred Ramsey Solution will be making the step up to graded competition for the first time. The winner of the one-mile, 70-yard Tapit last fall at Kentucky Downs – over a field that included English Bee, fellow graded winners Hembree and Hawkish and Dixie show finisher Midnight Tea Time – is trained by Wesley Ward.

“He’s always been maybe a cut below the top ones but he’s a very talented horse, especially when you get him in the right company,” Ward said. “He’s tough.”

Ramsey Solution went four-for-seven in 2020, ending the year with a front-running 1 ½-length optional claiming allowance triumph in November at Keeneland. In his lone start this year he ran second, beaten four lengths by subsequent Wise Dan winner Set Piece, in the 1 1/16-mile Douglas Park overnight stakes May 29 at Churchill Downs.

“He ran big last time. We got kind of compromised by the ride but I think there’s a lot more to him and he’s going to run a big race this time,” Ward said. “I think after this we’ll have a good opinion of where we need to go from here. This will be the race that kind of determines where we’re at with him, class-level wise.”

Mychel Sanchez will be up for the first time on Ramsey Solution, breaking from outside Post 6.

“I think he’s pretty versatile. He can do anything, that guy,” Ward said of the Real Solution gelding. “He can come from a little off of it or he can bounce right out there. If there’s a little give in the ground or it’s on the slop or if it’s a soft turf, he doesn’t mind that either. He’s a pretty cool horse.”

Lael Stables’ Talk Or Listen exits the same last two races as English Bee, having run second by a length in the Dinner Party and sixth by less than four lengths in the Prince George’s County, contested over a turf course rated good.

“He doesn’t like the soft turf. His previous race on firm was really good, probably a lifetime best in my opinion,” trainer Arnaud Delacour said. “The soft turf was a question mark, but he just didn’t handle it at all. The jock told me when he came off the bridle, that was it.

“I hope for a firm turf. The forecast is pretty good, and I think that he’ll like the mile. There should be plenty of pace and he should be able to sit there and do his thing and hopefully run well,” he added. “I’ve been happy with him. He had a good work the other day and came back well, so everything’s good.”

Daniel Centeno, aboard in the Prince George’s County, gets a return call from Post 3.

Completing the field is Posterity, owned and trained by Hassan Elamri. The 7-year-old Posse gelding rallied to edge Lucky Ramsey by a neck in a 1 1/16-mile claiming event June 18 at Pimlico, his fifth career win and first since an August 2019 allowance at Laurel.