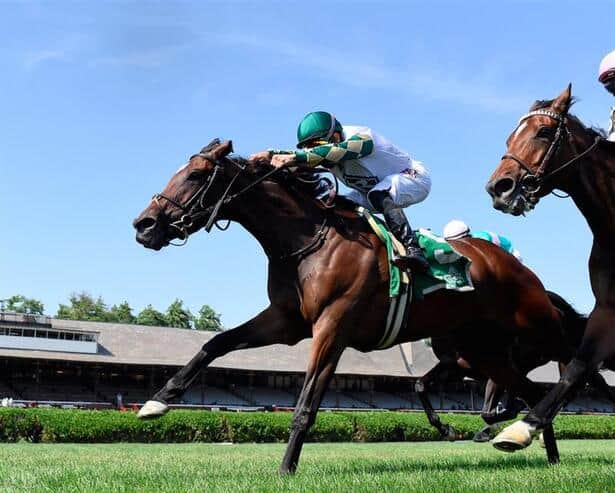 Reeves Thoroughbred Racing and Tango Uniform Racing's Feel Glorious moved at the right time under a well-executed ride by jockey Junior Alvarado to take Friday's seventh running of the $100,000 Perfect Sting for older fillies and mares going 1 1/16 miles over the inner turf at Saratoga Race Course.

Out of the gate, the pace was initially set by Chaleur, but Piedi Bianchi switched to the far outside and took command heading into the first turn through an opening quarter-mile 24.21 seconds as Chaleur, under a strong hold from Hall of Fame jockey Javier Castellano, took back a length in second over the firm turf.

Piedi Bianchi maintained control of the pace through a half-mile in 49.65 as the six-horse field approached the far turn, while Alvarado had Feel Glorious tucked along the rail in fourth position. Just past the quarter pole, Piedi Bianchi gave way as Chaleur took command with Altea unleashing her bid to the inside. Still in behind horses, Alvarado tipped Feel Glorious one path wider in the clear as she powered her way into contention.

Inside the sixteenth-pole, Feel Glorious overtook Chaleur and established command winning by a half-length in a final time of 1:42.09.

Chaleur finished another half-length ahead of Secret Message, who was a late closing third. Altea, Cafe Americano and Piedi Bianchi completed the order of finish.

A stewards inquiry and jockey's claim of foul launched by Joel Rosario, aboard fourth-place finisher Altea, against Castellano aboard Chaleur alleging interference in the stretch run was disallowed.

Alvarado said his filly responded well when receiving her cue.

"She broke very sharp out of the gate. She's a tricky filly. She can be a little rank sometimes, but most of that depends on the pace of the race," Alvarado said. "Coming into the first turn, I felt we were going a bit slow, so I tried not to fight too much with her and got to the rail. I was a little closer in the race that way and I didn't have too much to do at the end.

"Every time I asked her for a little bit of run, she was there for me," Alvarado added. "When we turned for home, I got lucky to get that nice run on the outside and she showed a nice kick at the end."

The victory was a seventh stakes win of the meet for trainer Christophe Clement, topping all other conditioners.

"He [Alvarado] probably felt it was never in doubt because he rode her with an enormous amount of confidence, so he probably felt he had a lot of horse underneath him the whole time," Clement said. "It was a short field of good fillies and I think she was the fourth or fifth choice in the race which surprised me because she trained very well and her two races this year were good races. I like her and I've always thought she was a very consistent filly. She's on the way up and she is a better horse this year than she was last year."

Feel Glorious picked up a third stakes triumph in the Perfect Sting. Last year, she won the Memories of Silver at Aqueduct and capped off her 3-year-old campaign with a win in the Winter Memories over a yielding Aqueduct turf course. The British-bred daughter of Bated Breath arrived at the Perfect Sting off two third-place efforts against graded stakes company in the Grade 2 New York on June 27 at Belmont Park and the Grade 3 Matchmaker on July 18 at Monmouth Park.

"It was a perfect ride because if you get her in position where she's not too far back, you know you have acceleration at some point," Reeves said. "Junior [Alvarado] is getting to where he knows this filly really well. He knows what he has at the end. His timing was impeccable."