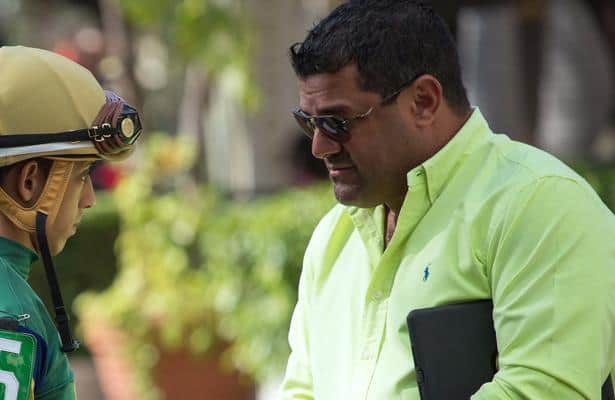 From February of 2018 to February of 2020, trainer Jorge Navarro entered horses in approximately 1,480 races. And during that span, it turns out he was doing so under the watchful eyes of federal agents.

In a bombshell indictment handed down Monday by the U.S. District Attorney’s Office of the Southern District of New York, the leading conditioner, who has saddled Grade 1 winners such as X Y Jet and Sharp Azteca, was said to be the ringleader in a “widespread scheme.”

Navarro is accused of concealing the purchase and use of performance-enhancing drugs along with trafficking agents to mask their use in horses, including the Group 1 winner X Y Jet. Referred to in the indictment as the “Navarro Doping Program,” it tied in fellow trainer Jason Servis, who counts champion 3-year-old Maximum Security among his runners.

Veterinarians Erica Garcia, Seth Fishman and Gregory Skelton were each named as defendants who aided Navarro in manufacturing and administrating “at Navarro’s discretion,” according to the indictment. Four others are said to have manufactured and illegally shipped PEDs “for Navarro’s benefit.”

“In many cases,” the indictment reads,” the customized PEDs were designed to be untestable.”

According to documents, Fishman was paid “tens of thousands of dollars” by Navarro for blood-building PEDs; drugs that increased a horse’s “V02 Max” levels, or breathing; and a shot referred to as “Frozen Pain.” Navarro once sent text messages, documents show, requesting “1000 pills asap.”

Navarro is also tied into a scheme by harness trainer Nick Surick, who allegedly provided Navarro a substance referred to as “red acid,” which the indictment says reduces joint inflammation.

Another harness trainer, Chris Oakes, is said to have developed a PED known as “drench” and supplied to Navarro. It is “designed to rapidly increase a racehorse’s performance during a race and be undetectable in drug tests.”

Navarro, who according to Equibase has won 1,225 races, used straw purchasers and false names to ship the PEDs, according to federal investigators, as well as “bodies of horses that have died on the property of Navarro or his co-conspirators.”

Surick once stated on an intercepted call regarding Navarro that, “You know how many f------ horses he f------ killed and broke down that I made disappear? You know how much trouble he could get in…if they found out…the six horses we killed?”

X Y Jet, the multiple stakes winner for Navarro who won the 2019 Dubai Golden Shaheen (G1), was said to be on PEDs when winning that race. On Feb. 13, 2019, just more than a month before the Golden Shaheen, Oakes visited Navarro’s barn to administer a drug. Navarro told Oakes that if “if they stop you,” to tell track officials he’s an owner visiting the horse.

Fishman congratulated Navarro via text message after the Golden Shaheen, to which Navarro replied: “u are a big part of it.”

X Y Jet died in January at age 8 of a heart attack. He was owned by California-based Rockingham Ranch, Gelfenstein Farm and David Bernsen.

Nanoosh, another horse co-owned by Rockingham Ranch, was mentioned in a May 29, 2019, conference call “with the operators of a racing stable in California,” according to the indictment. Nanoosh’s poor performance of late came up, at which point Navarro was asked if the trainer was giving the horse “all the s---.” Navarro responded: “He gets everything.”

Navarro, in his mid-40s, ended Todd Pletcher’s 15-year run of Championship Meet titles last year at Gulfstream Park while in Dubai. With 31 victories thus far in the 2019-2020 meet, he left the weekend seven behind Pletcher and in fourth overall.

Navarro stables horses at Gulfstream Park West (formerly known as Calder) and Palm Meadows Training Center, where Federal Bureau of Investigation agents were said to have been present Monday before documents were unsealed.

Indicted on two counts, Navarro faces a maximum sentence of 10 years in prison.