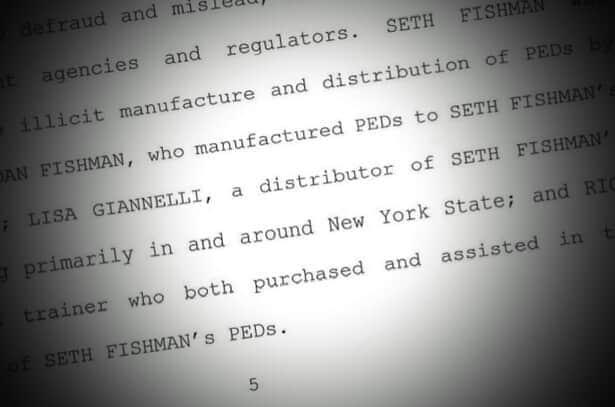 COVID temporarily upended the horse-doping trial of Dr. Seth Fishman and Lisa Giannelli, who are among the 27 racehorse professionals, including prominent trainers, charged in the federal case.

As the trial's second week began Monday, testimony was delayed after it was revealed that Giannelli's trial attorney had tested positive for the coronavirus before the trial was to resume.

U.S. district judge Mary Kay Vyskocil then declared a mistrial on Giannelli's behalf, because her attorney Louis Fasulo wouldn't be able to return to court until at least Feb. 3.

The jury never heard any witnesses Monday and Vyskocil sent it home after lunch with the resumption of the trial in doubt.

In the courtroom and without the jury present Fishman’s attorneys also moved for a mistrial.

Vyskocil reserved decision on the motion until Tuesday morning, but during back and forth with the Fishman defense team, she hinted she was considering having the trial resume with only Fishman. She told the defense attorney that was when the jury was told to come back to court.

The trial opened Wednesday with jury selection followed by two days of opening statements and testimony from three witnesses.

Federal prosecutor Anden Chow told the jury Fishman and Giannelli had for two decades operated a "black-market drug business" that peddled to horse trainers around the country performance-enhancing drugs that were administered to horses on race days and that couldn't be detected by horse-racing commissions in post-race testing.

Most of the testimony the jury has heard came from the government's first witness, Courtney Adams, 34, who worked at Fishman's South Florida business for five years until 2017. She said Fishman was fixated on creating drugs that were untestable.

Fishman attorney Maurice Sercarz told the jury his client's actions were in accordance with his veterinary oath to protect the safety and welfare of animals. Fasulo said Giannelli didn't believe she was doing anything wrong while working for Fishman.

They are charged with conspiracy to violate drug adulteration and misbranding laws in the doping horses. Prosecutors say the 11 trainers charged in the case acted to win lucrative purses without regard to the health of their horses.

Both Fishman and Giannelli are out on bail and were in court Monday.

The U.S. District Court in New York has implemented numerous COVID protocols to avoid outbreaks. The witness stand has been outfitted with a high-efficiency particulate air-filtered plexiglass box. There's also a HEPA-filtered plexiglas box for lawyers to use when they question witnesses. Masks are required of everyone in the courtroom, including the judge, but witnesses and lawyers may remove them if they are using those boxes.

During the weekend courthouse officials implemented a new protocol. It required that lawyers and witnesses needed to take a rapid test if they intended to remove their masks while using the boxes. It was when Fasulo took the test in accordance with the new protocol that he learned of the positive result.

Fasulo showed up the courtroom briefly and then left. He spoke to the judge via an audio hookup. His symptoms appeared mild. He told Vyskocil he had a "tickle in his throat."

"I don't know what we're going to do. I feel terrible," Fasulo said before consenting to the mistrial.

Fishman’s other attorney Marc Furnich argued a mistrial was warranted, given the positive COVID test. He also said it was warranted given that the trial’s beginnings had exposed a conflict in defense strategy with Fasulo. As proof, Fernich and Sercarz pointed to Fasulo’s opening statement.

“Mr. Fasulo’s second line was, ‘We sit here after hearing the government say Lisa Giannelli was a lone wolf in a herd of sheep. What she was was more the proverbial sheep herded by the sheep master,’ a clear reference to Dr. Fishman,” Sercarz said.

He and Fernich argued it would be difficult to convince the jury otherwise after they heard that and that Giannelli was no longer part of the case.

Vyskocil said she didn’t see what the problem was.

“Opening statements are not evidence, and the jury has been told that,” she said.

Still awaiting trial is Jason Servis, whose horse Maximum Security finished first in the 2019 Kentucky Derby only to be taken down for interfering with another horse. Prosecutors have accused Servis of doping dozens of horses in his barn, including Maximum Security.