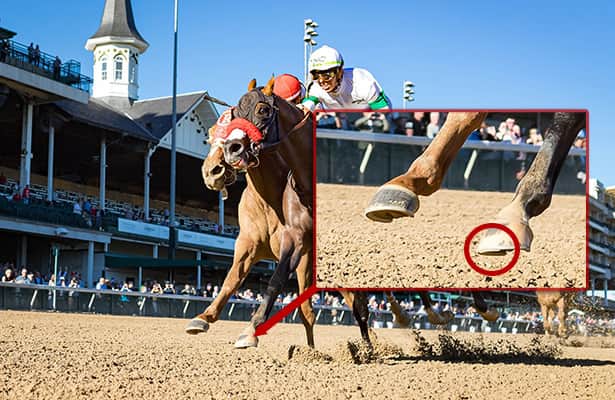 A prominent provider of racing-industry photos said Wednesday it had not turned over any digital images to the federal authority investigating the shoe controversy from last month’s Grade 2 Lukas Classic at Churchill Downs.

Scott Serio, the owner and managing editor of Eclipse Sportswire, did not rule out the possibility his contracted photographers might have decided individually to fulfill a Horseracing Integrity and Safety Authority request for shots taken of the winner Hot Rod Charlie.

“We received the overly broad request for ‘any and all’ images from the HISA attorney and, at this time, have not provided images,” Serio said in a written statement sent to Horse Racing Nation. “That said, our photographers are independent contractors, who were also contacted directly, and they may have chosen to supply images on their own.”

Picking up where Kentucky stewards left off last month, HISA lawyer Bryan Beauman asked four photographers last week to provide “any and all original files” from the race, presumably to find out whether Hot Rod Charlie wore illegal shoes.

“I am writing to obtain a copy of any and all original files … of Hot Rod Charlie and Rich Strike during the Lukas Classic race on Oct. 1, 2022, at Churchill Downs,” Beauman wrote in a Thursday letter to photographers Jenny Doyle, Jamie Newell, Scott Serio and Matt Wooley. “Please provide these items no later than (Friday) Nov. 18, 2022.”

Rich Strike’s owner Rick Dawson forwarded a copy of the letter this week to HRN and other media outlets. Since it was not clear whether HISA had the power to issue subpoenas, it was unclear whether the photographers ultimately could be forced to grant Beauman’s request for images.

“To maintain journalistic integrity and independence, we have requested that any attorney involved supply a subpoena, with which we would fully cooperate,” Serio said.

HISA picked up the investigation of whether Hot Rod Charlie had illegal toe grabs on his front shoes after a formal appeal was brought by Dawson. He disagreed with the Kentucky Horse Racing Commission ruling that there was no violation. After HISA endorsed the ruling, Dawson made his appeal through his attorney Barry Hunter. HISA said Oct. 31 it would hear the appeal.

Rich Strike, the 80-1 winner of the Kentucky Derby, finished second in the Lukas Classic, missing first place by a head. Three days later a third-party trainer made media members and Rich Strike’s connections aware of a Newell photo that appeared to show toe grabs on Hot Rod Charlie’s shoes.

Doyle and Wooley shot the race for Eclipse, which provided photos to its clients that include HRN. An examination of Eclipse’s images from the Lukas Classic brought to light more images of Hot Rod Charlie’s shoes.

After seeing the photos, Rich Strike’s trainer Eric Reed called Kentucky stewards. They then ordered an inspection of Hot Rod Charlie at his temporary barn at Keeneland, where he was stabled ahead of this month’s Breeders’ Cup. They also interviewed Dean Balut, a farrier regularly hired by trainer Doug O’Neill.

“The toe grab was grounded to flush,” Balut told KHRC stewards in an Oct. 7 teleconference, adding that Hot Rod Charlie “was actually shod on the 30th (of August).”

Hunter told HRN this month that he was trying to round up all the photos taken of Hot Rod Charlie’s shoes. Presumably, Beauman was trying to do the same thing, although a spokesperson told HRN on Wednesday that HISA had nothing new to report about the investigation.

“The HISA board of directors has requested that the connections of Rich Strike and Hot Rod Charlie be allowed to present any relevant evidence and documentation concerning Hot Rod Charlie’s participation in the Lukas Classic on Oct. 1, 2022, at Churchill Downs for consideration to HISA’s enforcement team,” HISA said in its Oct. 31 statement. “This follows HISA’s independent review of the documents and related evidence submitted by the stewards. HISA’s enforcement team will review the materials presented and determine whether to recommend any further action or review to the board.”

Coady Photography, which is contracted by Churchill Downs, already provided Kentucky stewards with its own images from the race, according to KHRC documents. Those photos were made available to HISA when the KHRC turned over its findings last month.

The Lukas Classic has been mired in controversy since the day it was run. Rich Strike’s rider Sonny León was suspended 15 racing days after he leaned hard to his left into Hot Rod Charlie’s jockey Tyler Gaffalione in the contentious duel in the deep stretch. León blamed a loose saddle.

Since Hot Rod Charlie won the race, there was no objection or inquiry posted against Rich Strike. It was unclear whether León’s ride might jeopardize a possible promotion of Rich Strike should the shoe matter lead to Hot Rod Charlie’s disqualification.