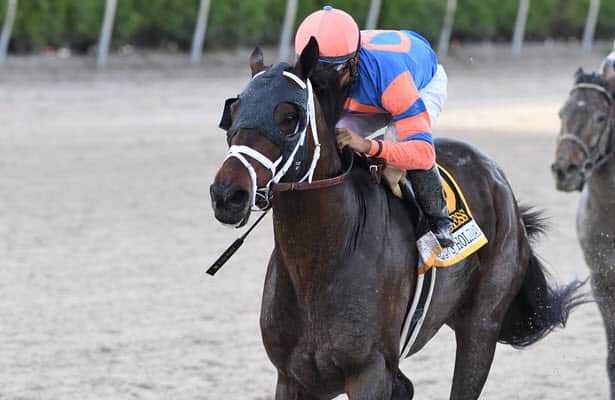 Hall of Fame trainer Todd Pletcher will double up for Saturday’s $150,000 Fred W. Hooper (G3), opting to run both Fearless and Liam in the mile stakes for older horses.

Pletcher had considered doubling up for the Pegasus World Cup with Breeders’ Cup Dirt Mile (G1) winner Life Is Good and Repole Stable’s Fearless. However, on entry day, Tuesday, the 18-time championship meet titlist decided to let Life Is Good go solo in the $3 million headliner and chose to run Fearless in the Hooper, along with Red Lane Thoroughbreds LLC and JSM Equine LLC’s Liam.

Fearless, who has won four of five starts at Gulfstream, is coming off a powerful four-length victory in the 1 1/16-mile Harlan’s Holiday (G3) after finishing second in a Nov. 21 overnight handicap at Gulfstream while coming off a six-month layoff.

“He’s a horse that I think kind of benefitted from the race off the layoff and then made a move forward in the Harlan’s Holiday,” Pletcher said. “He seems to really like Gulfstream. He always runs well over that track. He’s held form since then and has been training sharply.”

Before going to the sidelines for six months last year, the 6-year-old gelded son of Ghostzapper captured the Gulfstream Park Mile (G2) and finished a close-up second in the Oaklawn Handicap (G2) and third in the Pimlico Special (G3).

Liam came off a layoff of nearly 15 months Dec. 15 at Gulfstream to win a mile optional claiming allowance by 4 ½ lengths in his first start for Pletcher.

“He had a good allowance win off the layoff. He’s been training well, also, so we’re looking at the Hooper as the next step for him,” Pletcher said.

The 5-year-old son of former Pletcher trainee Liam’s Map broke his maiden at Remington Park in his third-career start Sept. 2020 before finishing third in the Oklahoma Derby (G2) and going on the shelf.

Luis Saez has the return call aboard Fearless, while Irad Ortiz Jr. is scheduled to ride Liam for the first time.

Officiating enters the Hooper off two stakes victories in his last three starts, including a triumph in the seven-furlong Mr. Prospector (G3) in his most recent start. The 4-year-old son of Blame, who was stakes-placed on turf when formerly trained by Hall of Famer Bill Mott, showed a new dimension when he won the off-the-turf Bear’s Den at Gulfstream three starts back. He finished far back while trying the new Tapeta course in the Showing Up in his next start but rebounded with his victory over Pegasus World Cup entrant Endorsed in the Mr. Prospector.

Girolamo’s Attack, who disappointed around two turns in the 1 1/8-mile Claiming Crown Jewel last time out, had previously defeated Fearless at a mile in an overnight handicap.

Tyler Gaffalione will ride Officiating for the first time, while Jose Ortiz has the mount aboard Girolamo’s Attack.

Calumet Farm’s Bon Raison will bring the biggest bankroll of all entrants into the Hooper. The 7-year-old son of Raison d’Etat, who has amassed earnings of $700,977 during his 49-race career, will be equipped with blinkers in an effort to break a six-race slump.

“I put blinkers on him and you can see from his last work that the blinkers have definitely helped him out. He worked 59 [seconds] flat [for five furlongs] and was in the bridle the whole way and galloped out real strong,” trainer Jack Sisterson said. “The talent’s there. There was just something missing and maybe the blinkers was that missing part. I think the way he breezed, he should be up to running a competitive race.”

Reylu Gutierrez has the riding assignment aboard Bon Raison.

Dennis’ Moment, who rallied to finish third in the Mr. Prospector (G3); Speaker’s Corner, who finished second in the Discovery at Aqueduct in his 2021 finale; Shivaree, who finished second in the 2020 Florida Derby (G1) and most recently won a Florida-bred stakes at Tampa Bay Downs; and Payne, an off-the-place winner of a six-furlong optional claiming allowance at Tampa last time out; round out the field.