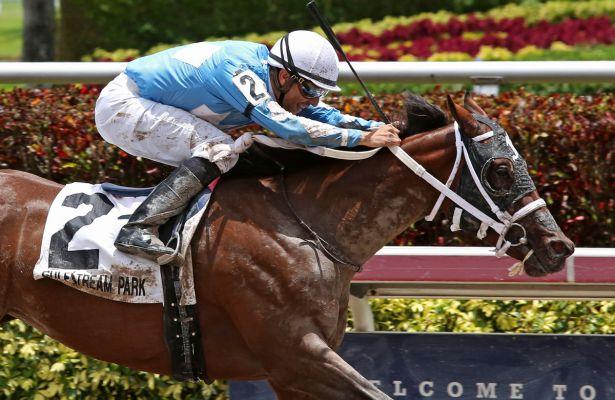 Trainer David Fawkes is slated to saddle a pair of 2-year-old fillies with different ownerships in Saturday’s $200,000 Desert Vixen at Gulfstream Park, having prepared Curtis Mikkelsen’s Cajun Delta Dawn and Stonestreet Stables’ Perfect Kay to perform at their respective highest levels in the first leg of the 2016 Florida Sire Stakes series.

“You wish the best for both connections. Each horse is different, in this case, so you just kind of let the riders ride their races and hope for the best for both of them,” Fawkes said. “The best-case scenario is it will be a dead-heat for win.”

Cajun Delta Dawn and Perfect Kay will clash for a second time when they meet in the six-furlong Desert Vixen, the co-feature on Saturday’s five-stakes program with the $200,000 Dr. Fager Division of the tradition-rich series for juveniles sired by eligible stallions standing in Florida. After each registering debut victories, the Fawkes-trained duo met in the July 2nd Cassidy Stakes on the Summit of Speed undercard at Gulfstream with Cajun Delta Dawn emerging with an off-the-pace victory. Perfect Kay appeared on her way to victory while setting an uncontested pace into the stretch, but she shortened stride late to finish third in a 1-2-3 finish by daughters of Kantharos.

Cajun Delta Dawn, who had debuted June 10 with a neck triumph after setting a pressured pace, pulled off a 17-1 upset by a half-length over a late-running Lirica, who was three-quarters of a length clear of Perfect Kay.

“I thought Cajun ran really well. Perfect Kay kind of helped set the race up for her,” said Fawkes, who has enjoyed substantial success in the Florida Sire Stakes, including future champion Big Drama’s sweep of the three-leg series in 2009. “Perfect Kay got a little tired and Cajun took advantage of it.”

“I’ll be honest, she does everything so easy, maybe I didn’t have her tight enough. I don’t know,” Fawkes said. “She got a little tired – she’d never been stressed in any of her works. She won her maiden race so easy, when she went into the stake, I think maybe she was short, got a little tired.”

Fawkes is confident that both fillies will perform at their respective highest levels in the Desert Vixen, in which they are scheduled to meet 11 other fillies.

“They both had really good works (last Saturday),” Fawkes said. “Both horses worked excellent and galloped out good. Both horses are coming into the race really good.”

Juan Leyva has the return mount aboard Cajun Delta Dawn, while Cornelio Velasquez has the call aboard Perfect Kay.

“I thought she ran really, really good,” Averill Racing’s Richard Averill said. “She’s not the biggest filly. We knew she was fast. Nobody’s ever been close to her out of the gate. It was kind of what we had expected. I drove three hours to watch the race. I was pretty confident.”

Although R Incredible Life was highly regarded, Averill didn’t hesitate to risk losing her at the claiming box in her debut.

Although she was expected to win, Averill was particularly impressed with the dominance R Incredible Life displayed in her debut.

“If you look at my program and the way I do things, I don’t usually get their best race first time out. If you look at my record, most of my horses get better as they get older,” Averill said. “That’s another reason for running for a tag. I could run for a tag and not have to have her at the top of her game. If I had to run in a maiden special weight, she would have had to been close to 100 percent going in to win. Running for a tag, she could be 70 or 80 percent going into that race and have something left in the tank for the next race.”

Emisael Jarmillo has the return mount aboard R Incredible Life.

Sandra Trotter’s US Diva will come into the Desert Vixen off a 23-1 upset triumph in a maiden special weight race on the Summit of Speed program. The Daniel Pita-trained daughter of United States registered a front-running 1 ¾-length victory under Jesus Rios in the five-furlong race.

Stonehedge LLC’s Lu Lu Laura was placed first in her debut May 25 upon the disqualification of Amapola, who won by nearly 10 lengths after running 4 ½ furlongs in the track record-breaking time of 50.99 seconds. Trainer Kathleen O’Connell, who named Eduardo Nunez to ride the daughter of Circular Quay, also entered Matalona Thoroughbreds’ Stormy Embrace in the Desert Vixen. Also a daughter of Circular Quay, Stormy Embrace captured a $50,000 maiden claiming race in her debut under returning jockey Tyler Gaffalione.

Flying Finish Farm’s Callie California, who finished second behind US Diva in that race, came back to graduate by 8 ½ lengths July 17. Miguel Vasquez has the return call Saturday aboard the Rory Miller-trained daughter of High Cotton.

Driving Mrs. B, Hello Juliet and Elsie Cole round out the field.