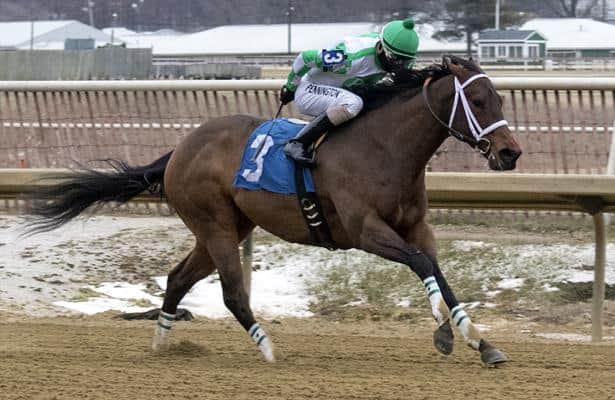 The six-furlong Dave’s Friend for 4-year-olds and up and $100,000 Thirty Eight Go Go for fillies and mares 4 and older going one mile, rescheduled from Dec. 30, marked the first stakes of the winter-spring meet which opened Sunday, Jan. 7.

A gelded 7-year-old son of Tale of the Cat, Favorite Tale ($15.20) fended off multiple stakes winner Struth from gate to wire to win in 1:08.93 over a fast main track. Great Stuff rallied to be third, with 17-1 long shot Schivarelli another length back in fourth.

It was the first win for Favorite Tale since taking the Fabulous Strike Handicap in November 2015, four weeks after finishing third behind Runhappy and Private Zone in the Breeders’ Cup Sprint (G1) at Keeneland.

Based at Parx racing with trainer Guadalupe Preciado and ridden Monday by Frankie Pennington, Favorite Tale raced only once in 2016 and had three starts to end 2017 finishing second twice, beaten a half-length each time, both in stakes.

“I’m very proud of him. It’s been a long way back. He finally got it done. I’m very proud of the trainer and Frankie rode a great race, and we’re finally glad to get it done,” winning owner and breeder Paul Conaway said. “We bred the horse, we own the mare, so we’ve had him since he was born. He’s very special to us. He’s family.”

Pennington allowed Favorite Tale to flash his speed early from Post 6, taking nine rivals through an opening quarter-mile in 22.40 seconds and a half in 44.73. Struth, coming off a dominant victory in the Howard Bender Memorial Dec. 9 at Laurel, contested the pace at Favorite Tale’s right flank, the pair going five furlongs in 56.39.

The dueling duo straightened for home together and set down for a battle to the finish that remained in doubt until Favorite Tale edged clear in the final sixteenth of a mile for his ninth lifetime victory, pushing his bankroll to $1,020,300 from 23 starts.

“When the horse came outside of me, [Favorite Tale] was game,” Pennington said. “Once [Struth] came up to give him the challenge, that’s what he waited for and he fought it out to the wire.”

Among Favorite Tale’s now five career stakes wins are 2014 Gallant Bob (G3) at Parx and the 2015 Smile Sprint (G2) at Gulfstream Park. In addition to the Breeders’ Cup, he was also third in the 2015 Alfred G. Vanderbilt (G1) at Saratoga.

“We’ll see how he comes out of this race. We always point to the Breeders’ Cup. It’s a long way off from now but we’ll take it one race at a time,” Conaway said. “We’re just excited to get this win under our belt. We’ve been looking for it for a while, and I’m happy for him.”

Michael Dubb, Bethlehem Stables and The Elkstone Group’s Bishop’s Pond, a 6-year-old mare racing for just the third time on dirt, broke on top and never looked back in a front-running 5 ¼-length triumph in the Thirty Eight Go Go.

Sent off at odds of 7-2 in the field of nine, Bishop’s Pond ($9) completed the mile in 1:36.13 for her first stakes victory in 24 lifetime starts and the first for jockey Rosario Montanez since moving his tack from New York to Maryland last month.

Bishop’s Pond, a daughter of Hall of Famer Curlin, made her first 20 starts on the turf before trainer Jason Servis put her on the dirt for a front-running allowance win at Delaware Park Sept. 11. She was fifth in the Beldame (G1) 19 days later and was back on the turf for her most recent start, the Nov. 25 Forever Together at Aqueduct, also finishing fifth.

Montanez settled Bishop’s Pond on the lead through fractions of 23.76 seconds and 46.96, chased for the first half-mile by Tiz Rude and Chic Thrill. They maintained their advantage on the far turn as Street Surrender launched a bid three wide and 2-1 favorite Crimson Frost came calling on the far outside.

Bishop’s Pond responded by opening up on her rivals at the head of the stretch, going six furlongs in 1:11.63 and pulling clear under a hand ride. Longshots Sky Flower (15-1) and Miss Inclusive (22-1) closed to be second and third, respectively, separated by less than a length, followed by Tiz Rude, Indian Paint, Crimson Frost, Street Surrender and Chic Thrill.

Grade 1-placed Line of Best Fit, breaking from the far outside post, stumbled coming out of the gate and lost rider Julian Pimentel, both emerging uninjured.

“When she broke out of there she broke out there so nice. I didn’t want the lead but she got the lead easily and she was so relaxed,” Montanez said. “When we turned for home I tipped her out to the middle of the track and she drew away. I never hit her. I showed her the stick and she took off and she galloped out great. I couldn’t ask for anything else.”