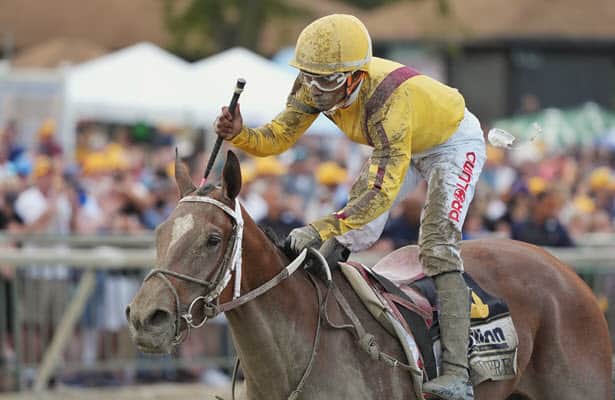 After coming up just short in three previous Grade 1 tries, Stonestreet Stables' homebred Clairiere broke through with a coveted top-level victory when scoring as the favorite in the Grade 1, $1 million Cotillion Stakes for 3-year-old fillies at Parx Racing on Saturday.

Sent off at 5-2 under Ricardo Santana Jr., Clairiere bided her time in mid-pack behind tepid opening fractions of 24.8, 49.6 and 1:13.8 set by the second-choice Always Carina. Clairiere launched her bid racing widest of all on the second turn and at the top of the stretch, kicked clear to win by 2 1/2 lengths.

"She was carrying along nicely within herself within striking range," winning trainer Steve Asmussen said. "She’s kept herself in great company all year and getting good when it matters most. Obviously, we’re going to speak to Stonestreet and stuff, with the numbers she’s got she’s consistently getting faster at the right time.”

Obligatory, who had pressed Always Carina on the front end, held on for second. She was followed by Army Wife with Maracuja completing the superfecta.

“She ran really well," said Obigatory's trainer, Hall of Famer Bill Mott. "I was pleased with her. She showed a little different dimension. She was a little closer to the pace and held well. She had her chance. We were second best.”

Clairiere paid $7.20. The well-bred filly by Curlin out of multiple Grade 1 winner Cavorting was fourth in the Kentucky Oaks (G1) this spring followed by a third-place finish in the Mother Goose (G2). Sent to Saratoga for the summer, Clairiere was third to Maracuja in the Coaching Club American Oaks (G1) and came back to be second in the Alabama (G1) to Malathaat, the leader of the 3-year-old filly division.

"I can’t tell you how what it means for Clairiere and Stonestreet (Stables) and that family that she comes from," Asmussen said of the filly's first Grade 1 win.