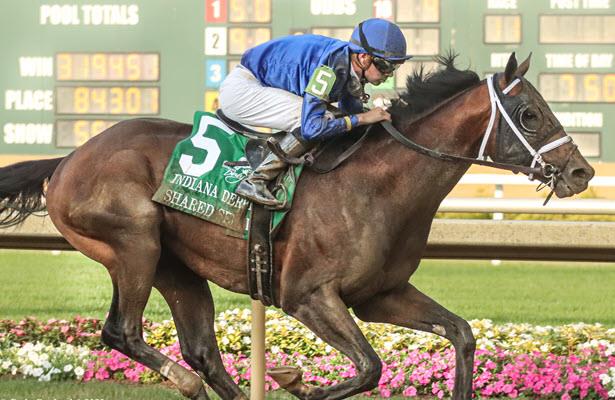 Godolphin homebred Shared Sense, bet down to the 5-2 favorite, collected his first qualifying points toward the Kentucky Derby after drawing off late and surviving a jockey's objection to win the Grade 3, $300,000 Indiana Derby at Indiana Grand on Wednesday.

Brad Cox-trainee Shared Sense and Florent Geroux--who in the previous race had teamed to win the $200,000 Indiana Oaks (G2) aboard Shedaresthedevil-- raced near the back of a bunched nine-horse field in the early going as Taishan set opening fractions of 23.93 and 47.69 for a half mile.

Saving ground along the rail throughout, Geroux eased Shared Sense out a couple paths entering the second turn and made it to challenge on the front-end after six furlongs in 1:12.27. Shared Sense was among a wall of horses in with a chance as the field entered the stretch, but the son of Street Sense forged to the front and comfortably held off the challenge of Major Fed to cross the wire 2 3/4 lengths in front.

However, James Graham aboard Major Fed claimed foul against Shared Sense for the tight racing. After a review of a few minutes, stewards' decided to make no change to the order of finish.

Stay with @TVG for all the action on the Road to the Derby by @spendthriftfarm! pic.twitter.com/dWmmj31TGW

Major Fed was followed across the wire by Necker Island and Earner. The top four finisher collected Kentucky Derby points paid out on a scale of 20-8-4-2. With the eight points earned by Major Fed, he moved up to 13th on the Kentucky Derby leaderboard with a total of 38 points.

Geroux felt there was nothing to the claim of foul.

“Beautiful trip to save ground all the way around there. It looked like the pace in front of me was honest," Geroux said. "I was about to get the split right turning for home.

"Maybe I had contact with the horse of Greg Foley’s, Major Fed. But honestly I don’t think it made a difference," Geroux continued. "If I beat him a head, maybe we can make a case for it But when my horse ran going away like this, it was pretty clear there was not too much going on there.”

Cox said it is still to be determined if Street Sense is made Triple Crown eligible. He would need to be supplemented for $45,000.

“That will be up to the Godolphin team. But look, he’s a nice horse," Cox said. "(Darley America president) Jimmy Bell and I have talked about it a couple of times, that a mile and an eighth is something he’ll like. Maybe even farther. He’s a tough horse. This horse, on the dry dirt, that’s where he gets his best races."

Runner-up Major Fed moved ahead of Storm the Court into 13th on the Kentucky Derby leaderboard. Trainer Greg Foley said the race is on the radar.

“We got eight points (for second and 38 overall),” Foley said. "We can run if we want to, I’m pretty sure. He (Major Fed) got pinched again (at the start). They went 48 for the half-mile. He was last by however much he was. He ran his butt off. He’s a good little horse. He’s going to get lucky one of these days.”

This is the first stakes win for Shared Sense, who is out of the Bernardini mare Collective. He was exiting a runner-up finish behind Blue Grass Stakes (G2) contender Art Collector in a third-level allowance race at Churchill Downs on June 13. In two other stakes tries, he was off the board in both the Smarty Jones at Oaklawn in January and the grassy War Chant at Churchill Downs on May 23.