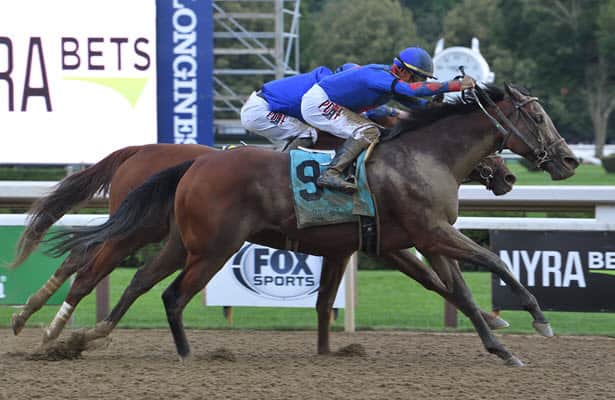 Lothenbach Stables’ Bell’s the One displayed her usual devastating late kick with a five-wide move in upper stretch besting Lake Avenue by a neck to win the 30th running of Wednesday’s Grade 2, $200,000 Honorable Miss at Saratoga Race Course.

The daughter of Majesticperfection arrived at the six-furlong event for fillies and mares 3-years-old and upward off a victory in the Roxelana on June 19 at Churchill Downs, where she notched millionaire status in defeating highly regarded female sprinter Sconsin.

Bell’s the One also won the Grade 2 Raven Run in October 2019 at Keeneland, the Grade 3 Winning Colors last May at Churchill and the Grade 1 Derby City Distaff on September 5 at Churchill. She won her Spa debut on Wednesday, tallying her fourth graded stakes triumph.

Breaking from outermost post 8 under Corey Lanerie, Bell’s the One took to the rear of the field as Ain’t No Elmers secured frontrunning position from her inside post and led through an opening quarter-mile in 22.80 seconds with Honey I’m Good to her outside in second position over the fast main track.

Around the turn, Bell’s the One launched her bid and started picking up ground, moving into sixth position with a rallying Lake Avenue to her inside through a half-mile in 45.85 seconds.

Just outside the three-sixteenths pole, Ain’t No Elmers maintained a slight advantage as Bell’s the One and graded stakes winner Lake Avenue ran eye-to-eye in the stretch drive. The pair of fillies moved past the pacesetter inside the sixteenth-pole with Bell’s the One getting her neck first on the wire, completing the six furlongs in 1:09.83.

Ain’t No Elmers finished another 2 ¾ lengths back in third, earning graded stakes black type for the second time.

Lanerie said he could feel his filly ready to make up ground.

“I just let her run her race and when she got on her left lead on the turn, she said, ‘it’s time to go’ and started making up ground so easily,” Lanerie said. “[Lake Avenue] actually put in more of a fight than I expected. I thought when I got to her, I was going to run away. But she wouldn’t go away for a while; we were running home. This was a good race. She ran her own race today and I let her do it. It can get kind of scary at times, especially here at Saratoga. It’s hard to win here.”

It didn’t take long for Bell’s the One to convey versatility having won over dirt, turf and synthetic in only her first four starts, all of which were wins. After a 32-1 upset triumph on debut in September 2018 over the all-weather surface at Arlington Park, she defeated winners over the main track at Keeneland Race Course the following month, ahead of stakes triumphs at Fair Grounds in the Letellier Memorial on dirt and the Allen Black Cat Lacombe Memorial over the turf.

“She's about as high-class a filly as you want,” Pessin said. “She gives it her all every time she runs. Hopefully, now she'll get the accolades she deserves, and people won't put her on the backburner when they talk about the sprint fillies.”

Pessin noted how difficult it was to make up significant ground on the Saratoga main track.

“They didn't go very fast,” Pessin said. “They went 22 and four for the first quarter, but she just took herself back and Corey didn't rush her, so I said we'll see what happens from there and she made her run like she usually does. It's been a hard track to close on today. I think she's the only one that deep-closed any at all, but I thought she was also the best horse in the race coming in, and I feel that way coming out.”

The veteran trainer said he considers Bell’s the One to be the greatest horse he has conditioned.

“She's about as special as they come to me,” Pessin said. “I've got one other filly that I had in her category, Eden Prairie, that didn't do the races that this mare's won but she was all heart and tried every time. They're the two favorite horses I've ever had.”