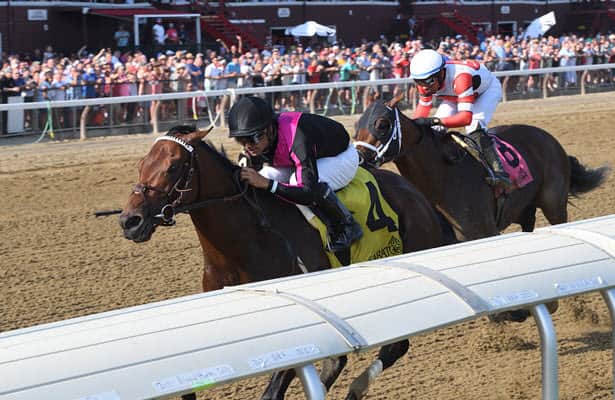 In his second start off the layoff, and first for Hall of Fame trainer Bill Mott, Art Collector got back on the beam Friday with a gate-to-wire victory in the $120,000 Alydar Stakes at Saratoga.

Favored Art Collector and new rider Luis Saez hustled for the early lead in the 1 1/8-mile restricted stakes. Night Ops, the 5-2 second choice, mounted mild pressure on the outside of Art Collector as the leader clicked off fractions of 24.51, 48.80 and 1:11.80 for six furlongs.

Those two had pulled away from the rest of the field on the second turn and when reaching the top of the stretch, Art Collector spurted clear of Night Ops to earn his first win since the Ellis Park Derby 362 days ago.

"The plan was to break well from our post and see if we can get the lead," Saez said. "Everything went the way we planned it."

Art Collector, who paid $5.60, completed the trip in 1:48.20. Math Wizard was third, with Core Beliefs completing the superfecta.

Art Collector returned from a layoff of nearly 7 1/2 months in the June 25 Kelly's Landing at Churchill Downs and was a lackluster sixth going seven furlongs for trainer Tommy Drury Jr. Subsequently transferred to Mott and stretched out to two turns for his second start off the bench Friday, the 4-year-old son of Bernardini responded with his sixth win in 13 starts for owner/breeder Bruce Lunsford.

Art Collector closed out last year with an eighth in the Breeders' Cup Dirt Mile.

“If you looked at his form, he might have lost his way in the last race or two," Mott said. "He was a little unlucky for one reason or another, so we just wanted to pick out a softer spot to start out. I’m glad we were able to do that and get us and the horse off on the right foot.”

"All I had to do was look at his form and see what he had done before," Mott said. "If you look at his nine-furlong races, you saw he had done very well for the previous trainer. But Tom Drury and I had trained for Bruce and Bruce wanted the horse in Saratoga, so Tommy sent the horse up to us and he was in good shape when he came. We’ve had him six weeks and he’s done well since he’s been here.”