Fault runs down Journey Home in Pucker Up 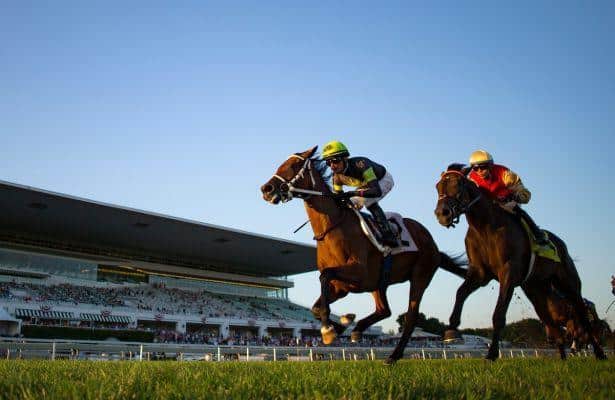 Photo: Kaz Ishida/Eclipse Sportswire
In the Million Day finale, Agave Racing Stable’s Fault saved all the ground early and angled out in mid-stretch to run down Sam-Son Farm’s Journey Home in the final strides of the Grade III $100,000 Pucker Up for 3-year-old fillies. With Miguel Mena aboard, Fault earned his first stakes win, completing the 1 1/8 miles over a firm turf course in 1:50.08. The final margin was a neck with Lovely Bernadette 2¾ lengths further back in third.
Breaking from post two, Mena found the rail early and sat comfortably in mid-pack while a trio of longshots set the pace through early fractions of :22.99, :49.04, and 1:13.80. A compact field came into the stretch with fair chances aplenty. Mena had to wait to find room off the rail but once he eased over and saw daylight Fault responded with determination.
“She’s just maturing and she keeps getting better,” said trainer Michelle Lovell, a former jockey who rode under her maiden name of Michelle Hanley in the 1990s, earning her first graded stakes win since taking out a training license in 2003. “We’ll take it one step at a time from here.”
Journey Home, winner of the Grade III Jimmy Durante at Del Mar as a juvenile, spurted away from the pack into the stretch but could not match Fault’s late run.
“He broke well and got into a good position,” Journey Home’s rider Jose Ortiz said. “At about the half-mile he worked his way out and I tried to follow [Canny]. I went a little wide but was second-best.”
Fault, a Kentucky-bred by Blame, paid $26.20, $10.60 and $7.20. Journey Home returned $5 and $3.60, with Lovely Bernadette paying $4.60.
Fault was coming off three straight runner-up finishes since early June, including one last time out in the Ta Wee Stakes at Indiana Grand. The bay filly broke her maiden at Fair Grounds in January and had beaten winners only once before, for a $50,000 tag at Churchill Downs during Derby Week. The $55,800 winner’s share of the purse boosted Fault’s career earnings to $142,595 with her third win from eight career starts.
Canny, Princess La Quinta, Donemesswithjoanne, Sensitive, Lipstick City, Happy Mesa, Katinka, Mo’s M V P and Royalty Princess completed the running order.
Earlier on the card, Elizabeth Southam’s Harmac upset the proverbial apple cart in the $75,000 Bruce D. Memorial, closing strongly from seventh of eight to win by 1¾ widening lengths in the one-mile Polytrack event.
Sent off as the longest shot on the board at 27-1, the Grant Forster-trained son of Langfuhr finished up in 1:36.10 under Miguel Mena, while returning $56.40, $25 and $11.40. Stakes winners Smoke ’n’ Gloat ($6.20 and $4.20) and Kitten’s Cat ($4) finished second and third, separated by 2½ lengths. Winning for the third time from six starts, Harmac nearly doubled his career bankroll to $88,098.
“He felt great and Grant gave me a lot of confidence,” Mena said. “He just dragged me around and I kept him out of trouble and swung him to the outside and he was there for me.”

“It was a gamble to run here today, but he had run very well on the turf in New Orleans this winter,” Forster added. “There’s not a lot of spots for an up-and-coming 3-year-old right now, so this seemed like a good opportunity and we took a crack at it. We will look and see what our options are. Possibly the Smarty Jones at Parx on Labor Day weekend or the Oklahoma Derby in six weeks.”