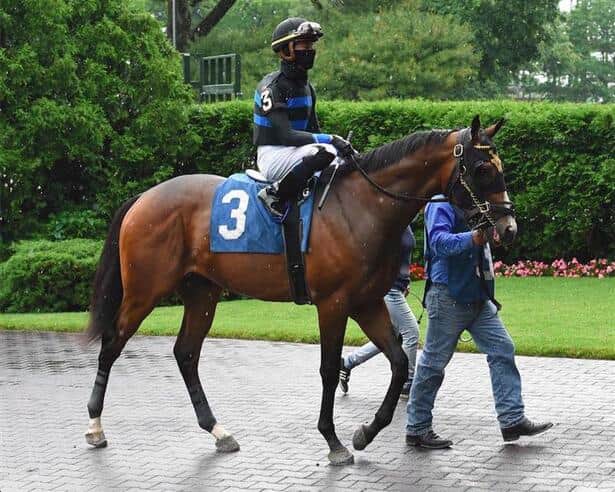 Trainer Wesley Ward will be putting three of his finest juveniles on display Friday afternoon against three other 2-year-olds in the fifth running of the $85,000 Skidmore, going 5 1/2 furlongs over the Mellon turf at Saratoga Race Course.

Lindy Farms and Ice Wine Stables' Fauci will arrive at the Skidmore off a one-length maiden score over a yielding turf on July 9 at Keeneland, following a runner-up on debut on the Belmont Park main track in June.

Ward said the son of Malibu Moon has the ability to race over both surfaces, but prefers turf at this stage in his career.

"He can do both," Ward said. "I see more ability on grass than dirt right now. I was impressed with how he ran on the soft turf at Keeneland. I've seen in the past where a horse goes 58 and change and then backs out. For him to take that heat up front and still go on with it was nice to see. He has heart and he has will."

Fauci is named after Dr. Anthony Fauci, one of the world's leading experts on infectious diseases who has played a prominent role on the White House Coronavirus Task Force during the COVID-19 pandemic.

Bred in Kentucky by Spendthrift Farm, Fauci was purchased for $175,000 from the Keeneland September Yearling Sale, where he was consigned by Paramount Sales. He is out of the Intikhab mare Tashzara, who is a half-sister to Group 1-winner Lancaster Bomber as well as multiple Group 1-winning multimillionaire Excelebration.

Fauci will break from post 5 under jockey Tyler Gaffalione.

Raino Investments' well-bred maiden Golden Pal has been a close second in both of his lifetime starts, the most recent of which took place in the Norfolk (G2) on June 19 at Royal Ascot, where he was beaten a neck. In his career debut, he set a swift pace up front and was beaten three-quarters of a length in a 4 1/2-furlong maiden special weight over the Gulfstream Park main track, where he finished ahead of next-out winner Just Right Mike.

Golden Pal, a Florida-bred son of Uncle Mo, is out of 11-time stakes winner Lady Shipman, who won the 2015 Coronation Cup and Smart N Fancy at the Spa.

"He is a very, very special colt. He is really an amazing horse and if he keeps moving on up, I think he could really be something," Ward said. "He's done everything right, and he's just extremely, extremely gifted."

Ward said Golden Pal will likely follow in the footsteps of his highly successful mother and become a solid sprinter.

"He's pure speed," Ward said. "He takes after the mare in that regard. He's got a real great personality. He's like the high school quarterback, just thinks he's a real cat daddy."

Golden Pal will be ridden by Irad Ortiz Jr. from post 6.

Ken and Sarah Ramsey's Sunny Isle Beach has not raced since June 6, where she was a narrow winner on debut at Churchill Downs for a $75,000 tag. The daughter of Jimmy Creed laid mid-pack early in the five-furlong event and was caught seven wide at the top of the stretch but shifted to the inside of rivals down the lead to score a narrow victory.

Bred by her owners in partnership with Dixiana Farms, Sunny Isle Beach is out of the Kitten's Joy broodmare Kathern's Kitten.

"She's doing well, she's done everything right. The race might be a little tough for her, but we're giving it a shot," Ward said.

Ward will give a leg up to Hall of Famer Javier Castellano from the rail.

The Skidmore is slated as Race 3 on Friday's nine-race card, with the first post at 1:10 p.m. ET.