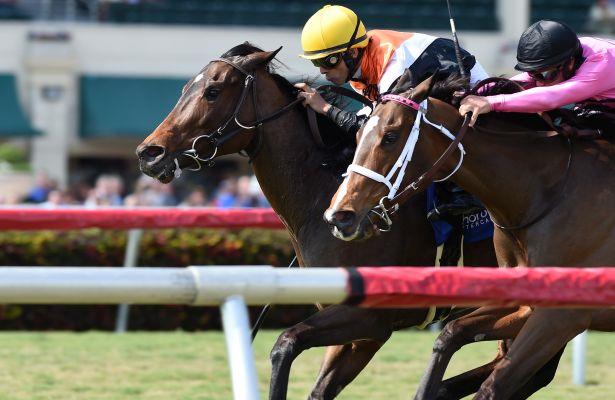 Family Meeting, a sixth generation homebred for Glen Hill Farm, edged away near the wire following a thrilling stretch duel with Frosty Friday to win the Sunshine Millions Filly & Mare Turf by a neck Saturday at Gulfstream Park.

The Filly & Mare Turf for 4-year-olds and up and Filly & Mare Turf for females 4 and up at 1 1/16 miles was the first of five Florida-bred stakes on the 15th annual Sunshine Millions Day program that preceded the 46th Eclipse Awards ceremony, being hosted by Gulfstream for the fifth straight year.

“It was really nice to win. She was [37-1] when she won her last stake,” said Craig Bernick, president and CEO of Glen Hill Farm. “We always thought she was a pretty nice filly but she had never won another race since, so I’m really happy she won another stakes race today.”

“We’re having a good day. We won a stake, mission accomplished,” Bernick said. “It’s very special to win this race.”

Rontos Lily sprang to the lead from Post 6 through a quarter-mile in 24.54 seconds and a half in 49.07, with Frosty Friday tracking in second and Family Meeting unhurried in fourth. When Frosty Friday moved up to overtake the pacesetter for the lead she was followed by Family Meeting moving effortlessly to her outside.

“I was really worried. She sort of has a wild run in her but I thought he used her a little bit down the backside and I was afraid that she wasn’t going to get by that horse in the stretch,” Bernick said. “She hasn’t made an early move and won before so I was happy that she did. She’s a come-from-behind turf horse and they need to get their trip on the day.”

Family Meeting hooked up with Frosty Friday to her inside after turning for home and they battled the length of the stretch before Lezcano urged his 4-year-old filly clear. Frosty Friday was a clear second, three lengths ahead of 2016 Filly & Mare Turf runner-up E B Ryder.

Elizabeth Aurora, Sumfloridasunfun and Rontos Lily completed the order of finish. Mom’s On Strike, the 2-1 program favorite, was scratched.

“I didn't want to be too close early. She broke good,” Lezcano said. “When I asked her, I let her pick it up, little by little, on the backside, and then basically she went on to win the race. I felt like there was a lot of horse under me, even though it might not have been on full display."