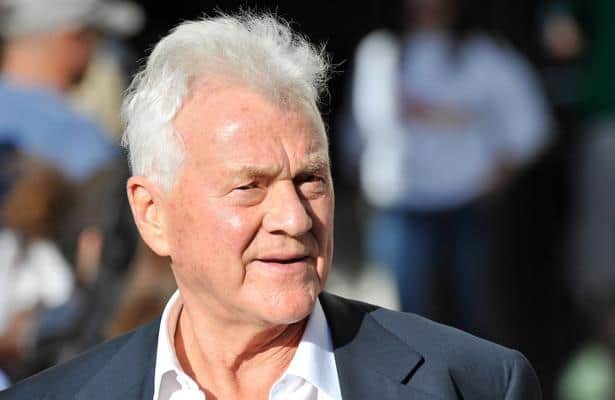 Franch Stronach, the Canadian businessman who in addition to owning and breeding horses assembled a top network racetracks, has filed a lawsuit claiming more than $500 million in damages and alleging his daughter, current chair of The Stronach Group, Belinda Stronach, committed “a series of covert and unlawful actions” against the family.

The Thoroughbred Daily News reported that it obtained what it calls a 73-page “bombshell” lawsuit from the Ontario Superior Court of Justice. Stronach is seeking a trial and demands, among other things, removal of Belinda Stronach and co-defendant Alon Ossip, The Stronach Group’s CEO.

According to The TDN, Stronach’s wife, Elfriede, is a co-plaintiff, while his grandchildren (and Belinda Stronach’s childen), Nicole and Frank Walker, are also co-defendants as an apparent fracture in the family spills over into the public domain.

In 2016, “Belinda and Alon informed Frank for the first time that TSG was facing significant liquidity issues,” the suit reads. “This came as a surprise to Frank and raised red flags about their management of TSG.” Additionally, Stronach alleges his daughter reimbursed “hundreds of thousands of dollars in personal expenses.”

Additionally, and outside the business, in 2017 Stronach reappointed himself to many of the family trusts he had formed to share his fortune, hoping to reassume control of the wealth. The source of the rift is Belinda Stronach’s insistence that the actions were illegal.

In a statement Wednesday, Paul Deegan, a spokesman for Ossip, The Stronach Group's CEO, said, “These allegations are baseless and are not grounded in fact or reality."

"Alon has always honored his obligations and acted in good faith to preserve and grow the Stronach family’s assets and to protect the interests of all members of the family," Deegan added.

"Alon created huge wealth for the family, and he has always operated in a prudent and commercially-sensible manner. Frank Stronach was a great auto parts entrepreneur, but his recent excessive spending and numerous failed ventures put his family’s wealth at risk.

A former politician, Belinda Stronach has also been referred to as Canada’s most powerful business woman. She formerly worked for Magna International, Stronach’s auto parts business, before Frank Stronach appointed her head of the other family business. In recent years, she has stressed modernizing racing, and has become a front-facing proponent of Gulfstream Park’s Pegasus World Cup, which runs for a third time in January.