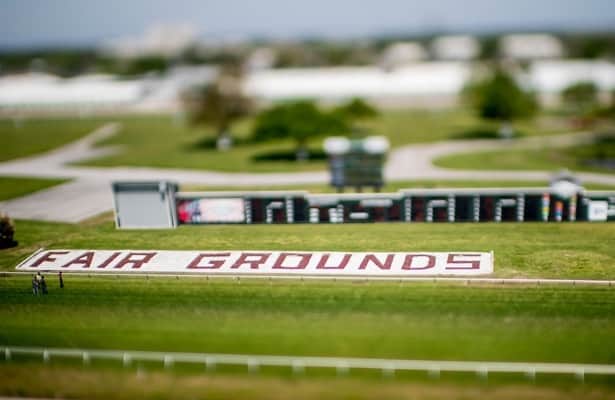 Fair Grounds Race Course will begin its 150th season with its traditional Thanksgiving opening day on Thursday. The card for the first day of racing includes nine races, two of them stakes.

The trainer has 10 horses entered on opening weekend in New Orleans, including Seven Scents in Friday’s feature race, a $42,000 allowance race going six furlongs on the main track.

Faucheux narrowly defeated Brad Cox in the chase for last year’s title at Fair Grounds. Cox, who was the four-time defending champion at the track, finished the 2020 meet with 37 wins.

Cox also is back for 2021, with eight entries on opening weekend. Two of those come in Thursday’s Joseph R. Peluso Memorial Stakes, a $75,000 event for fillies and mares 3 and up going 1 1/16 miles on the turf.

That race is set to feature 11 horses, with Cox’s Dominga installed as the 7-2 morning-line favorite.

Asmussen returns to Fair Grounds with 12 starters for the first weekend of racing.

James Graham was the leading jockey at Fair Grounds last year, with 88 victories during the meet. He returns with 26 mounts on opening weekend.

Graham will ride Bellagamba for trainer Ignacio Correas in the Peluso Memorial.

Adam Beschizza, second in 2020’s jockey standings, is not at Fair Grounds for opening weekend. But Mitchell Murrill, who finished third in the quest for last year’s riding title with 73 wins, will be back.

Murrill will ride 29 horses during the weekend. He will be in the irons aboard Necker Island in the Thanksgiving Classic and Alms in the Peluso Memorial.

The Fair Grounds meet will feature four Kentucky Derby prep races, including the Lecomte (G3), Risen Star (G2) and Louisiana Derby (G2). New to the schedule, both for Fair Grounds and the Derby trail, is the Gun Runner on Dec. 26, which will offer points payouts of 10-4-2-1 to the top four horses.

The wagering menu for the meet includes $1 minimum bets for win, place and show, as well as exactas and the daily doubles. Takeout on WPS bets is 17 percent, and it is 20 percent for exactas and doubles.

Minimum wagers for trifecta, Pick 3, Pick 4 and Pick 5 bets will be 50 cents. Those wagers will have a takeout of 25 percent.