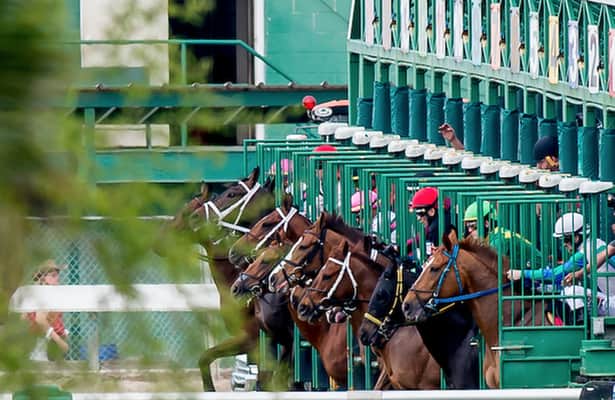 For the third time in the past decade, Fair Grounds will lose a significant amount of turf racing because of the poor condition of the grass course.

“Due to very recent weather-related setbacks and out of an abundance of caution for both our riders and horses, turf racing will be suspended immediately,” Fair Grounds management told horsemen in a Wednesday letter obtained by Horse Racing Nation. “Currently there is an aggressive plan in place to allow for optimal turf growth with the anticipation that we will be able to have limited turf racing the last week of December.”

The story was first reported Thursday by Marcus Hersh of Daily Racing Form.

Thursday’s fourth race, originally carded for the turf, was moved to the main track. DRF said the same thing will happen with Friday’s fifth, Saturday’s seventh and Sunday’s seventh races. There were no turf races scheduled for next Thursday’s card, which was drawn Wednesday.

The grass at the New Orleans course was affected by a recent lack of rainfall, a Fair Grounds spokesperson said in a text message to HRN last week when asked why the meet opened with nothing but dirt races.

“It has been a hot, dry fall here,” the text said. “We saw the forecast for cooler weather and rain, which we got (last) week, and decided to give it one more week to grow.”

The DRF report Thursday said the inner part of the turf course looked bad not only because of the recent drought but also because salt water got into the well that is the irrigation source for the grass. The plan had been to run a limited number of turf races with the rail set at 28 feet before that idea was scrapped.

“The turf course will be continually monitored and, as turf conditions improve, additional turf races will be offered,” Wednesday’s letter to horsemen said. “Any changes will be communicated as they develop. We appreciate your understanding and patience as we deal with these unprecedented turf issues.”

Horsemen have expressed their dissatisfaction with the lack of notice about this decision, saying they were assured last month that there would be turf racing at Fair Grounds.

Stakes races affected by the decision include the Pan Zareta on Dec. 3 and both the Turf and Ladies Turf on Louisiana Champions day Dec. 10. The Blushing K.D., the Buddy Diliberto Memorial and the Richard R. Scherer Memorial on Dec. 26 presumably could be the first grass stakes of the meet, if the course recovers in time. There are no graded stakes scheduled for the turf until the Fair Grounds (G3) on Feb. 18.

The current trouble brought back memories of the 2012-13 and 2013-14 seasons, when poor drainage was blamed for the cancellation of dozens of turf dates.

Churchill Downs Inc., which owns and operates Fair Grounds, already had been dealing with grass problems at its namesake racecourse in Louisville, Ky. Races on the grass were curtailed there after a horse broke down and was euthanized June 11 on a new, $10 million course that was left with a lot of divots. Limited turf racing resumed with the course looking much improved during the current fall meet that ends Sunday