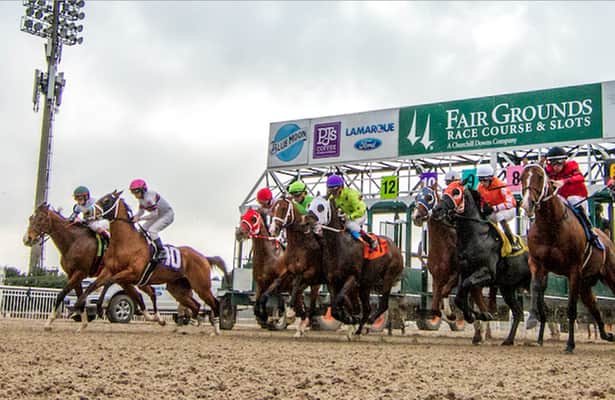 In case you haven’t noticed, and judging by the handle you haven’t, Fair Grounds reduced takeout on the Pick 5 to 15 percent for the racing season that began Nov. 18.

Get Power Picks for Fair Grounds

The Pick 5 at Fair Grounds has taken its lumps through the years. Not only was it a jackpot wager but also featured 25 percent takeout.

Fair Grounds eliminated the jackpot “feature” two years ago, but the 25 percent takeout remained. Horseplayers rightfully complained about that, and Fair Grounds listened. The aforementioned horseplayers seemingly have not responded in kind, as handle on Pick 5 wagering Thanksgiving week cratered 37.4 percent.

Now to be fair, total handle was down 35.9 percent that week, so there always was going to be some decrease. No turf racing, off tracks, smaller field sizes and a reduction in the overall market all played some part in the Fair Grounds decrease. That still doesn’t explain why horseplayers played less of the 15 percent takeout Pick 5 this year than the 25 percent variety last year.

To wit, the Pick 5 was 3.9 percent of Fair Grounds’ handle Thanksgiving week this year compared with 4.0 percent last year.

Parx added another jackpot Pick 5 to its wagering menu this week. The bet has a 15 percent base takeout with 70 percent paid out to multiple or no winners and 30 percent to the single-winner jackpot. That makes the takeout any day without a jackpot of 40.5 percent. Horseplayers are playing for only 59.5 percent of the pool on a daily basis compared with 85 percent at Fair Grounds yet still dumped an average of $43,295 into each of these bets, 36 percent more than the Fair Grounds average.

I’m not in the habit of telling horseplayers what to do. We take it on the chin far too many times and should absolutely feel empowered to "vote with our bankrolls," but if I may be permitted the pulpit for just a moment.

At least give the Fair Grounds Pick 5 a shot.

I used to be an employee of the owner of Fair Grounds, and I fear that if the bean counters see they lost money reducing takeout, then similar reductions elsewhere will go away while the hope of additional reductions will be lost forever.

This is not meant as a scare tactic. Just reality.