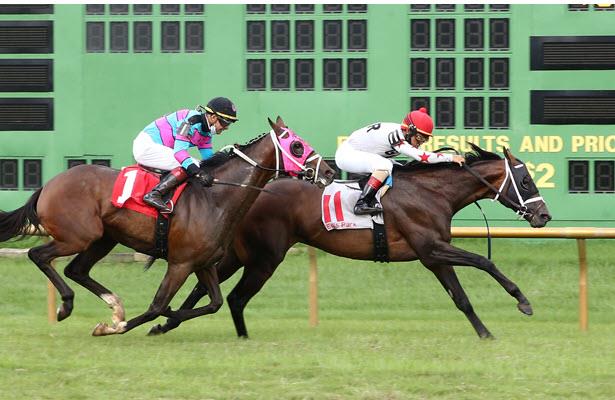 The pressure never let up on Factor This as he made his 1 ¼-mile trek around Ellis Park on Sunday. It was an expected byproduct that comes with the burden of heavy favoritism, but it still made trainer Brad Cox’s nerves fray slightly as he watched it unfold from afar.

While being the target comes with the territory when one brings a streak of graded victories to the table, so too does having the mettle to turn back any attempts to thwart that momentum. So after sending one threat after another on its way during the $100,000 Kentucky Downs Preview Turf Cup Stakes, Factor This dug into the depths of his class in the final strides to keep the late-charging Hierarchy at bay by a half-length and notch his fourth straight triumph.

Having earned consecutive wins in the Grade 3 Fair Grounds Stakes, Grade 2 Muniz Memorial Classic, and Grade 2 Wise Dan Stakes this season, Factor This came into the Preview Turf Stakes with the biggest reputation in the 11-horse field and, by extension, the most to lose. His front-running style is no secret so when the 4-5 favorite bounded away under jockey Shaun Bridgmohan, he was met first by longshot Phantom Currency, who kept his head in front through opening fractions of :24.99 and :50.25.

“There was obviously another horse up there on the pace. That’s a tough post (10) to win from, the way they angle the gate at the quarter pole,” said Cox, who watched the race from his base in Louisville. “He had to overcome some things today. Laid in the two path around both turns. But overall, I was super pleased with the horse. He always shows up.”

Factor This put his neck in front of Phantom Currency past the half but just as that challenger began to drop back, Ry’s the Guy started to come with his bid and drew even with the son of The Factor around the far turn.

The nimble turn of foot from Factor This allowed him to put a bit of daylight between himself and his rivals entering the lane but that reprieve was short lived as Hierarchy came to him in deep stretch. To Cox’s relief, that’s as far as an upset bid would get as Factor This hit the wire a half-length in front to capture the race for a second straight year.

“Our horse wears blinkers and I think wants he feels the pressure of the other horse, he’s got a lot of fight in him,” Cox said. “He showed that this winter at the Fair Grounds and probably showed it more than ever this summer at Churchill in the Wise Dan.

“(The soft turf) was another thing he had to overcome today. There was some pace presence today, the post and he won this race last year and set the track record - I know the race has only been run a few times at that distance.”

The final time was 2:04.52 over a course rated soft. Split the Wickets was third, 3 ¾-lengths behind runner-up Hierarchy.

“He got a perfect trip saving a lot of ground and got out, but he was second-best,” said Corey Lanerie, jockey of Hierarchy. “We just couldn’t go by him.”

Join us next weekend as @TVG will be on-site for more live coverage of the #Runhappy meeting at Ellis Park w. @ScottTVG & @Gabby_Gaudet_! pic.twitter.com/nfvQFjNART

Factor This has two fees-paid berths in $1 million races: the Grade 3 Calumet Farm Kentucky Turf Cup on Sept. 12 at 1 1/2 miles - a race he was fourth in last year - and the Grade 1 Old Forester Bourbon Turf Classic at Churchill Downs on September 5 for winning the Fair Grounds’ Grade 2 Muniz.

“We’re going to let the dust settle. I think we’d like to take a shot in the Grade 1 on Derby Day,” Cox said. “I feel l like kept a pretty close eye on that division from a mile and an eighth to a mile and a quarter and I don’t see anyone to be scared of, to be honest with you. I think this horse can win a Grade 1, given the right set up and the distance.”

Owned by Gaining Ground Racing and bred in Kentucky out of the Singspiel (IRE) mare Capricious Miss (GB), Factor This has won four of five starts in this his 5-year-old campaign with his lone defeat being a third-place run in the Colonel E. R. Bradley Stakes at Fair Grounds on January 18. He is also unbeaten in three starts at Ellis Park and improves his overall mark to 11 wins from 30 starts with $902,780 in earnings.

“He’s a cool horse. I get along with him and he makes my job easy,” Bridgmohan said. “You just have to get him in position and he usually does it all. They come to him and he fights. He makes me look good every time. He’s a hard-trying horse and as gutsy as they come. I’m just a passenger on him. He does all the work.”