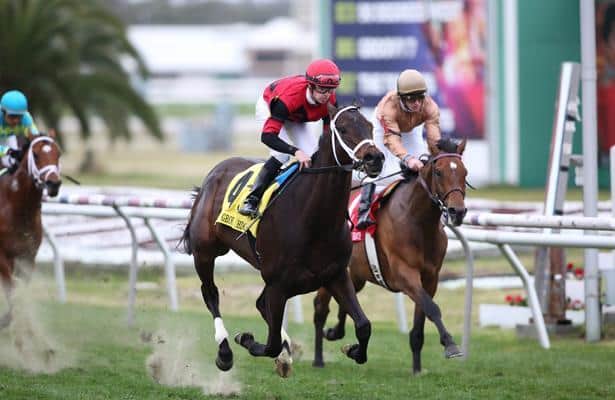 The local turf division has become increasingly interesting, especially with the recent progression of locally based Brad Cox trainee Chocolate Ride. A lightly raced 5-year-old son of Candy Ride, the bay gelding made his last two starts winning ones at Fair Grounds, including a rousing gate-to-wire tally in the Grade III $125,000 Fair Grounds Handicap over nine grassy furlongs on Feb. 21. Just two weeks prior, the ex-Mark Casse trainee took an allowance at the same course and distance with aplomb and has improved vastly since being claimed five races ago from a Churchill Downs dirt race. A charge with troublesome feet, he has flourished this winter under the watchful gaze of Cox’s on-site assistant Ricky Giannini – a horsemen who not only appropriately operates a sweets-serving foodtruck on the side, but also has his pupils serving up victories at a sweet meet-leading 31% on the grass.

Chocolate Ride, according to Cox, will now focus on winning another nine furlong Fair Grounds turf stakes – the Grade II $400,000 Mervin H. Muniz, Jr. Memorial Handicap on Mar. 28, the top turf race of the season. He will most likely meet the only other horse to win a turf graded stakes this meet – Charlie Smith’s very popular Louisiana-bred String King, who has had the Muniz on his radar since a victory in the Grade III $125,000 Col. E. R. Bradley Handicap on Jan. 17. Earlier this season, the 7-year-old 15-time winner also took the $100,000 Louisiana Champions Day Turf with ease. His owner/trainer/breeder Smith has been doing his best to keep the lively son of Crowned King calm as he prepares for yet another assault on New Orleans from his northern Louisiana base.

The major disappointment in Chocolate Ride’s Fair Grounds Handicap was Calumet Farm’s Neil Drysdale-trained Skyring, who checked in last of 10 as the 5-2 favorite after finishing second by a nose in the same race last year – one race prior to winning the Muniz in gate-to-wire fashion. Never really involved, the son of English Channel made a lackluster bid around the far turn and then faded badly. Word is that the often spotty charge is possible to return for the Muniz, despite such.

Also expected to return is post time second-choice and exciting second-place finisher Glenard. Owned and recently purchased from England by Andrew Stone, who owned globetrotting 2012 Grade I Beverly D. winner I’m a Dreamer, the Graham Motion-trained son of Arch skimmed the rail to rally for a strong second in the Fair Grounds in his American debut. Previously a stayer in Europe running distances ranging from 1½ to 2¼ miles, he seems to be just starting his rally at the nine furlongs of the Fair Grounds. Still, he is likely to return for the aforementioned connections in the Muniz.

Two horses who ran well but did not quite sparkle in the Fair Grounds who may return for the Muniz are Bortolazzo Stable’s Pyrite Mountain from the Florida barn of Todd Pletcher and Gary and Mary West’s locally based Wayne Catalano trainee Highball. While Pyrite Mountain ran evenly to finish third at a distance slightly below his best, Highball was the bigger disappointment as he had every chance to make an impact at the top of the stretch, but fizzled after tipping out and ranging outside the winner.