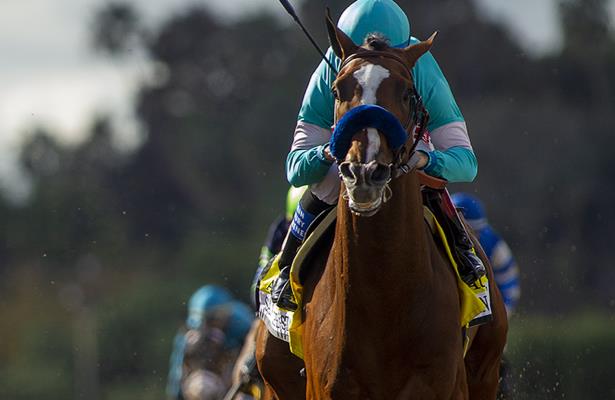 The Santa Anita Derby (G1) has been reduced in purse value to $400,000 but not prestige, with a compact field running Saturday for Kentucky Derby qualifying points on a 100-40-20-10 scale to the top-four finishers.

It's a rematch of unbeaten Authentic and Honor A. P., who were 1-2 last time in the San Felipe Stakes (G2). Key to making money, however, may be correctly determining which runner to play underneath the top choices.

Below is how Horse Racing Nation's team is playing the Santa Anita Derby with free past performances available when coming to your own conclusions.

Analysis: It's great to see a few horses making their graded stakes debuts in the Santa Anita Derby, but I believe the top three spots will go to more seasoned runners at this class level. Expect Authentic to hold off a game challenge from Honor A. P. with Azul Coast not far behind in third.

On the board: #7 Authentic, #3 Shooters Shoot

Analysis: Honor A. P. makes his first start in three months, but his last race in the San Felipe ended a five-month layoff. This time, he should be fresh and has that race under his belt. Plus the extra furlong suits his style. He comes in off two sharp five-furlong drills and should be ready to run his best. Authentic has done little wrong in his short career. His three wins were by a combined 11 1/2 lengths, all on the front end. When challenged, he has turned back his competition every time. His durability will be challenged on Saturday. Shooters Shoot has won two in a row, including a highly touted allowance over Blackberry Wine. He has early speed and has shown he can win a fight. He right now might be a cut blow the rest, but if he can get the early lead and set slow fractions, he has an upset chance. Azul Coast has not raced since February, winning the El Camino Real Derby at Golden Gate Fields. In his other stakes try, he was well beaten by Authentic in the Sham Stakes. He has trained sharply for this race but he needs a live pace and must show he's sharply improved to beat this bunch. I'll play a 6-7-3-5 superfecta box.

Analysis: Since the start of the Santa Anita meet last month, early speed has dominated in dirt routes. Track statistics reveal winning horses at The Great Race Place have been less than one-length back at the second call. Such a scenario immensely favors Authentic. The unbeaten Bob Baffert runner is the fastest of the group who does his best running on the front end. He will be extremely tough to deny. His main rival, Honor A. P., made his first start in five months last out in the San Felipe and ran well behind the top choice. He must keep himself within striking distance to have a chance to turn the tables. Shooters Shoot has plenty of early foot as well. Although the top two have a class advantage over him, Shooters Shot could land a share given the track profile.

Analysis: Authentic is a top-tier Kentucky Derby contender. Some others here are decent but seem to represent "the best of the rest" out west. A straight Authentic over Honor A. P. exacta may be the way to go in a race that isn't too compelling on paper. Shooters Shoot will probably try to run the favorite off his feet. He'll likely tire and finish up the track. Rushie got throttled by Charlatan two back, but his speed figures put him in the mix at a price.

Analysis: Honor A. P. is lightly raced and on the improve. He stretched out and dominated in his one mile maiden win last fall and followed that up with a clear place finish in the San Felipe. His May 22 bullet drill stands out. Authentic has yet to be seriously tested after three facile victories from as many starts. He might prove an elusive target if able to get out to any easy lead again, but Shooters Shoot might challenge him early. That, along with the added distance, might give Honor A. P. a chance to turn the tables on him. Azul Coast is probably going to sit back and land a share. Friar’s Road is a maiden with improving numbers. He added blinkers and finished a good 2nd last time.

Analysis: With more distance and better fitness, Honor A. P. holds the advantage this time in his matchup against Authentic. After Shooters Shoot guns for the lead and softens up Authentic early, a stalking Honor A. P. can swoop in and gradually take over at the top of the stretch. For a double-digit longshot underneath, Friar's Road owns previous experience at nine furlongs and figures to pick off enough tired horses late if the pace sets up for his run.

Analysis: The Into Mischief colt, Authentic, should keep his undefeated record Saturday in the Santa Anita Derby. I predict the his rival, Honor A. P., will have to settle for second again in a virtual repeat of the San Felipe for the top two finishers.

Analysis: There's plenty of speed signed up, and Honor A. P. could get a good stalking trip under Hall of Fame jockey Mike Smith. The son of Honor Code also figures to relish the added real estate. I'll make a straight win bet.