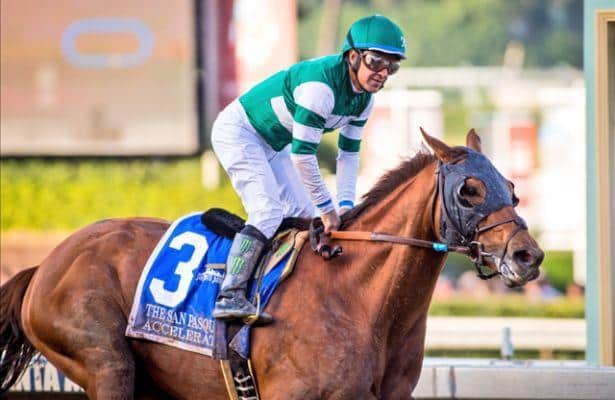 In a race that could determine the top California-based contender in this year's Breeders' Cup Classic, Accelerate and Pavel headline a field of eight in Saturday's Grade 1, $1 million TVG Pacific Classic at Del Mar.

Trainer Bob Baffert has also entered two, including a newcomer to his barn in Roman Rosso, a multiple Group 1 winner in his native South America. Prime Attraction appears to offer some value as well given his best previous effort came at the seaside oval.

Ahead of post time, set for 9:40 p.m. ET Saturday, here's a look at picks, longshots and a few suggested plays from the Horse Racing Nation team:

Analysis: The Pacific Classic is Accelerate's race to lose. He is in the best form of his career and the leader of the older handicap division. He already has two 10-furlong wins this season, and loves the Del Mar track, winning the San Diego and finishing third in the Pacific Classic last year. The one concern is new rider Joel Rosario, as this will be his first time aboard Accelerate. If he can get a clean trip and stay on the outside, he can win. Roman Rosso is an unknown and hasn't raced in five months. He comes in with sharp works, however, and gets a vote of confidence from Baffert to go straight into this spot. Pavel finally broke through in the Stephen Foster, taking advantage of an average field. The same can be said about the field he faces Saturday. He and Accelerate are the two richest horses in the field, but Pavel must get first run on Accelerate if he wants to win. Dr. Dorr has been consistent all season long, though in two starts at 10 furlongs, he was beaten soundly first by Accelerate and was a big disappointment in the Grade 2 Suburban at Belmont. He catches an average field on Saturday, and he will get a ground saving trip on the inside. If he can get the lead and control the pace, he has a chance for the upset. I will play a 5-4-7-2 superfecta box.

Analysis: Roman Rosso is a multiple Group 1 winner in South America and successful at classic distances. The colt’s been in serious training since early June with regular, sharp works. He appears ready for a big effort in his U.S. debut, and the red-hot Flavien Prat is aboard. Accelerate is one of the top runners, if not the leader, of the older division. He’s won two of the major Grade 1 races (Santa Anita Handicap and Gold Cup) in the classic division, both at the 10-furlong distance. Pavel exploded with a breakout win in the Stephen Foster in June. Maybe it’s a sign of better things ahead for the O’Neill horse. I’ll bet Roman Rosso to win and exacta box him with Accelerate and Pavel.

Analysis: I see Accelerate making easy work of this field. Even with some talented early speed up front, he is classy enough and should receive a nice setup.

Analysis: Accelerate appears to be in another league than his opponents here. He has already proven himself against Dr. Dorr and Pavel, the second and third-best horses lined up. If a longshot must be used, Beach View might be able to work out a good closing trip and shake up the vertical wagers a little bit.

Analysis: The race should set up well for Accelerate to control things. His workouts leading up to the race have been very impressive, and coming off a layoff shouldn’t be a problem. If Pavel has remained in good form, he could be Accelerate's biggest threat.

Analysis: Accelerate's track record this season makes it hard to look elsewhere for a win, but if you toss Dr. Dorr's New York performance, he's consistently been on the board in Southern California this year and could add a little value to a ticket with Accelerate on it. It's hard to say what Pavel and Roman Rosso will do. Pavel finally broke a string of fourths in Grade 1 company. A lighter field here could help put him on the board, while Roman Rosso's winning form could carry over from South America if he doesn't need a race to adjust stateside.

On the board: #4 Roman Rosso, #3 Prime Attraction

Analysis: Accelerate needs this race, likes the track and distance and is clearly a deserving favorite. The big question is Baffert's newest cast member, Roman Rosso, in his U.S. debut. Replays indicate the 5-year-old is smart and hangs near the front end before making his move. I find value in Jim Cassidy's Prime Attraction with Kent Desormeaux in the irons along with the front-running Dr. Dorr, ridden by karaoke sensation (for the Permanently Disabled Jockeys Fund) Joe Talamo.