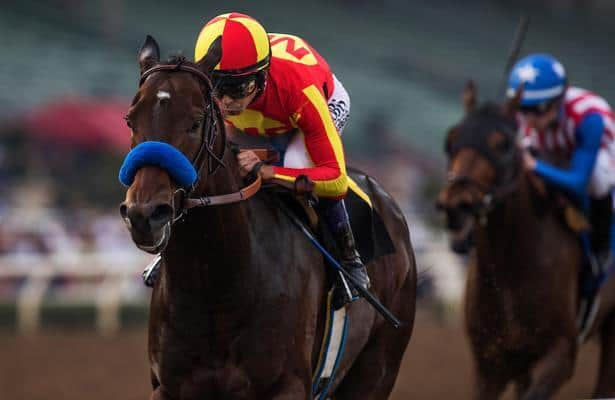 Santa Anita's Winter Meet will open Wednesday with a bang when a full field of heads postward for the Grade 1, $300,000 Malibu Stakes. The seven-furlong event marks the final top-level event of the year restricted to 3-year-olds and drew two big-name contenders in McKinzie and Axelrod, both last seen in the Breeders' Cup Classic, along with a number of other familiar sophomores.

Post time for the Malibu, Race 9 of 10 on a Santa Anita card that also includes the La Brea (G1) for 3-year-old fillies, is approximately 7 p.m. ET. Here's how the Horse Racing Nation crew handicapped the feature:

Analysis: This event is wide open, so I’m looking strictly for a price play. Seven Trumpets prompted the pace in his first try versus older in the Breeders’ Cup Dirt Mile before fading. Prior to that race, he put forth solid efforts at Parx and Saratoga, the latter his lone try so far at seven furlongs. He gets the pace he needs, and I expect him to rebound back to that Spa effort. McKinzie looks to regroup after his dismal showing in the Breeders’ Cup Classic. He has trained sharply since then and now faces an easier group. He cuts back to one-turn, but his speed figures going long stand out. Copper Bullet reappeared in November with an easy victory after being sidelined for 15 months. He’s talented and has the early speed which he could put him in control of the pace.

On the board: #13 McKinzie, #5 Identity Politics

Analysis: The pace should be honest, and Axelrod might be in the right spot throughout under John Velazquez. He ran well in both local starts and Mike McCarthy is a fine dirt sprint trainer. McKinzie looked good beating Axelrod off the bench in the Pennsylvania Derby, and he easily graduated in his career debut at this distance. Identity Politics is lightly raced and on the upswing for Chad Brown. Still Having Fun got plenty of pace help in his Woody Stephens upset at this distance on June 9 and might spice up the exotics. Copper Bullet was a graded sprint winner as a juvenile and returned with a sharp score at this distance on Nov. 23. #Kanthaka won all three of his local extended sprints, including the Laz Barrera and San Vicente, under Wednesday's rider, Flavien Prat. Suggested wagers: #6 to win, exacta box 6-13, exacta 6-13/4-5, trifecta 6-13/3-4-5-6-12-13/3-4-5-6-12-13.

Jonathan Lintner, Best of the Web

This time of year, I'm looking for horses on the upswing, as opposed to those ending arduous campaigns. While I wouldn't be surprised if as many as half in this field win it, Ax Man has proven dominant at times around one turn but tended to melt down pre-race. He was gelded, given the time to heal, and Bob Baffert runners rarely need a race coming off a layoff. I'll avoid getting too fancy here and play Ax Man across the board assuming he's at least at the 5-1 morning line price.

Analysis: Axelrod owns a high 127 TimeformUS Speed Figure from his runner-up finish in the Pennsylvania Derby to McKinzie. If the pace sets up as expected, he could fly late from a deep closing position to win. At 10-1 or higher, he is a solid win/place bet candidate, and a horse that deserves an "A" spot in horizontal wagers.

Mary Dixon Reynolds, The Gallop Out

Analysis: This could be the best distance for Baffert's McKinzie, who beat Axelrod in the Pennsylvania Derby. After a clunker in the Breeders' Cup, he can shine by rebounding in the Malibu.