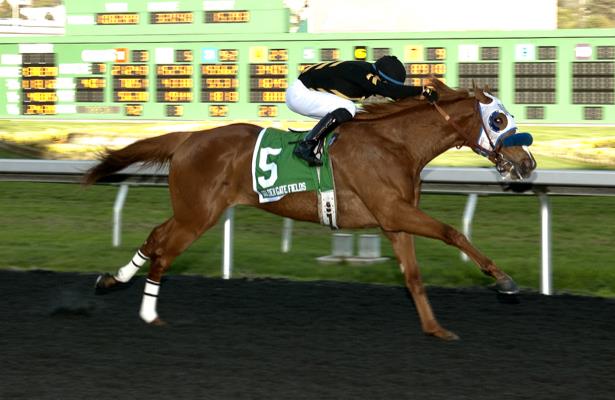 While it’s not the most stout of 2018 Kentucky Derby preps, Saturday’s $100,000 El Camino Real Derby, the 1 1/8-mile feature at Golden Gate Fields, does present an interesting betting race, with the ability to make the case for a number of the nine contenders — even a filly who’s the second choice on the morning line.

We polled our network of contributors for their picks and analysis. Post time is 6:57 p.m. ET. Good luck!

Analysis: Paved is a filly who has blossomed over the last few months. She dominated maiden company and has turned in stellar works at Santa Anita on her way to her first try against the boys. In her win, she stalked the pace and drew off despite the one post and did it with style. Jockey Drayden Van Dyke makes a rare trip to Golden Gate Fields to ride, another reason to like her. Look for Paved to "pave" the way to the winners circle on Saturday.

Analysis: Mugaritz has excellent local form, sharp works, top trainer/jock and classes up well. All of which could add up to victory. Choo Choo also sports local form for trainer Hollendorfer who has won the race six-times. If the filly Paved can transfer her turf ability to Tapeta, a win over boys wouldn’t surprise. City Plan may have ‘bounced’ last start following a tough race off a layoff. Look for him to rebound here.

Analysis: Calexman, Epical and Unlawful Act will roll to the front at the start, as that is the only way they can win. Paved should press just behind them and make a winning move on the turn for home. Choo Choo and Blended Citizen will be right there with her, but I think the filly's post and rider will put her over the line in first. City Plan is a stakes winner at Golden Gate and has faced much, much tougher in Bolt D'Oro and McKinzie. He even beat Ayacara and Dark Vader, who hit the board in the Bob Lewis. Worth a play.

Analysis: City Plan is back to synthetic after taking on McKinzie in the Sham Stakes. Right now, McKinzie is one of the highest regarded 3-year-olds and is not to be taken lightly. Choo Choo just needs to stretch one more 1/16th to win this race off his last outing, but will need to continue improving in regards to speed figured.He has the second-highest Brisnet speed figure of 87, but it’s a whole 13 points behind Paved, who earned a 100 last out. Could Be the One is stretching out but has won or placed in 7 of his 9 lifetime starts. He is an all weather professional, but can he go two turns effectively?

Analysis: At a track that often sees a rail bias, the filly, Paved, should sit a perfect trip behind plenty of early speed.

Analysis: The filly, Paved, is in to win this race, without concerns about the Derby points offered. Her speed figures have improved with each start, and the light came on last time. Choo Choo is a proven runner who I’m not sure will thrive going a bit longer than last time. Mugaritz keeps Mario Gutierrez, even with a Doug O’Neill runner in the race, and Epical will go off at a nice price off a debut win. City Plan worries me a bit given his win on the surface, but he wasn’t competitive next out.

Analysis: The lone filly, Paved, catches a weak field here. Plus, she just won a turf race by a little over five lengths, which counts as a blowout in grass racing as it’s harder to separate from the field. Most of the horses from the California Derby and Eddie Logan Stakes are on the slow side, except for perhaps Choo Choo.

On the Board: #5 City Plan. #2 Blended Citizens

Mostly I'm sticking with the horses that have raced and thrived previously on Golden Gate's surface.