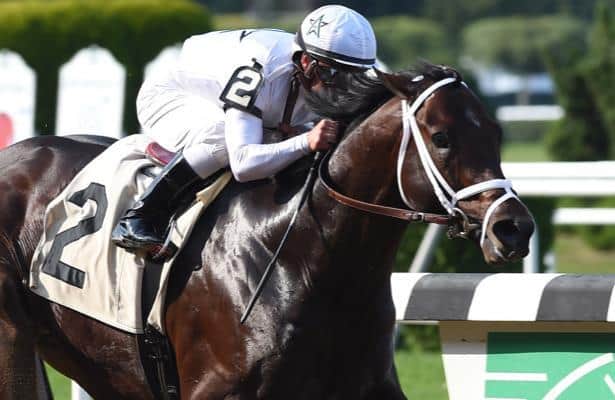 Plenty of questions will be answered with Saturday's Hal’s Hope Stakes (G3), but they make for quite the handicapping puzzle entering the Gulfstream Park feature.

Can the newly turned 4-year-olds finally make the grade against older rivals? Was Sir Anthony’s stakes win over Audible a wet track fluke? Will Copper Town get out of the gate this time?

#3 Breaking Lucky (2-1) is a solid threat in this spot after a runaway win in a local flat mile optional claimer late last year and a runner-up finish in the slop at this course/distance in the Fred Hooper (G3). He should be forwardly placed under Luis Saez.

#1 Tale of Silence (5-1) has not been seen in more than nine months but likes this distance and owns competitive numbers. He might need the outing, though the inside post is an advantage at this trip, and Barclay Tagg shows a +ROI with 90-plus-day layoff runners.

#7 Copper Town (6-1) may not have cared for the slop last time in the Fred Hooper and was also fractious at the gate. He also had a bad start over a speed-favoring surface in the Cigar Mile (G1) before that. He looked very good in his three wins and can make the grade if he rediscovers that sharp form. Javier Castellano sticks with the Todd Pletcher trainee.

#9 Prince Lucky (8-1) won the Easy Goer Stakes for 3-year-olds in his second start as a gelding last May and has not been seen since. Pletcher is very good with this type of layoff runner, and his winning rider, John Velazquez, stays put. He shows a couple of bullet workouts for this engagement.

Who knows what to make of #5 Quip (4-1)? The sophomore males of 2018 have yet to defeat older graded stakes foes around two turns. I like his early pressing versatility, and this is a good distance for him, but he probably needs his first outing since the Preakness.

#8 Sir Anthony (20-1) won his last four starts and rode the rail to upset Audible on a wet track in the Harlan’s Holiday (G3). He will try to get involved late, but I do not like the late runner in this spot.