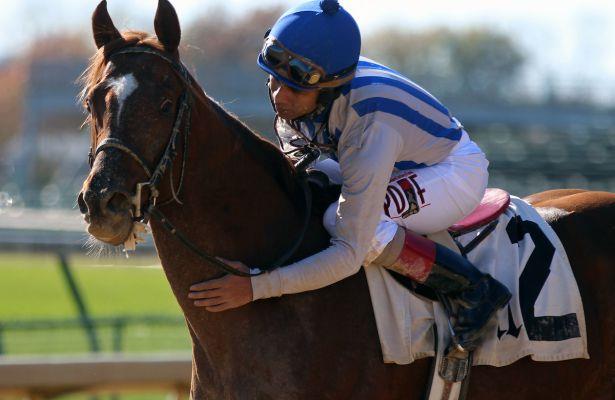 The busy Thanksgiving holiday weekend stakes schedule continues on Saturday at Aqueduct, Churchill Downs and Del Mar. I selected one graded stakes race from each of those venues. Let’s see if we can cash a ticket or three.

Gronkowski ran great in the Belmont Stakes after a slow beginning but has not done much in two stakes starts since. He has no speed and will not offer any value.

Life’s a Parlay was the betting favorite in all three starts and captured two of those. Todd Pletcher’s lightly raced colt owns early-pressing versatility and has upside.

Plainsman has improved since moving to the Brad Cox barn. He won at Aqueduct Nov. 3 and might be able to click right back.

Bon Raison stretches back out and returns to the sophomore ranks. He won at this distance at Saratoga Aug. 6 and is probably the one to catch.

Restless Rider held the place in the Breeders’ Cup Juvenile Fillies last time, and she smartly won the Alcibiades at Keeneland before that. She likes this oval and possesses tactical speed. She is a solid contender.

Champagne Anyone is slowly improving for Ian Wilkes and she is bred to love added ground (Street Sense-Ghostzapper). She will try to get involved late.

Break Curfew is interesting in her second career start for Chad Brown. She easily went all the way as the favorite in her dirt sprint debut at Belmont, and she looks like to one to catch in this spot as well.

Reflect was clearly second best behind Restless Rider in the Alcibiades and was training well heading into the Breeders’ Cup, but she threw in a clunker after making a middle move in that event. She drilled a local bullet for this Nov. 17 and can compete with these on her best day.

Synchrony is the tepid morning line favorite. He captured five of his six starts on firm ground, and Saturday's rider, Joe Bravo, was aboard for four of those wins. He is 2-for-2 at this distance.

Pincheck is a fresh overseas invader with Mike Smith in the saddle. He fired trifecta shots in his last four starts in Ireland including a sharp Group 3 victory Aug. 16.

Big Score finally gets an inner draw, and we will see if that leads to an improved finish. He was fifth from post 12 in the Shadwell Turf Mile last time, and he rolled a pair of 4s in his first two local starts this year. He was second in the Del Mar Derby and Hollywood Derby here last year.