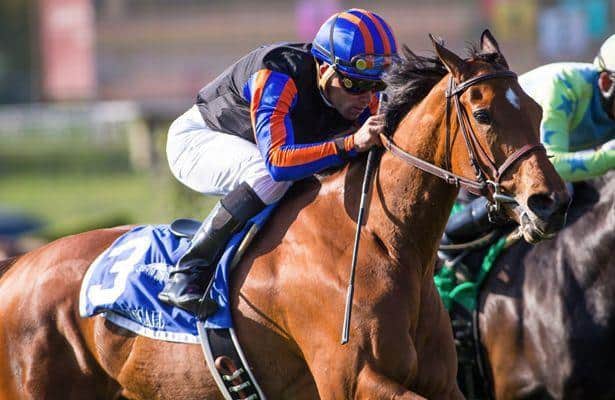 On Saturday, Fair Grounds will offer an all-stakes Pick 4 as part of its Santa Super Saturday program that includes 14 races in all in New Orleans.

The Pick 4 sequence will start with the Letelier Memorial, carded as Race 7 with a scheduled post time of 4:24 p.m. ET, and runs through Race 10, the Buddy Diliberto Memorial at 5:51 p.m.

Here's how I'm tackling the sequence:

Comments: #10 Unholy Alliance (9-2) won her fast track debut at Churchill Downs Sept. 16 -- a race that produced three next-out winners -- and followed that up with a victory in the slop at that same venue on Nov. 9. She gets pace to chase and can score again for the productive Shaun Bridgmohan and Brad Cox team. #2 Bell’s the One (9-2) is 2-for-2 and should be finishing. #3 Smila’ssenseofsnow (9-2) is 2-for-2 and should show speed. #4 Idle Hour (8-1) was a sharp local front running winner Nov. 23. #5 Adventurous Lady (9-2) fired exacta shots in her last five starts, three of them wins. #7 Istan Council (12-1) can compete here if she duplicates her sharp Keeneland maiden win. My top choice, Unholy Alliance, dusted her in her other two starts. #9 Lady T N T (7-2) brings more speed to the table. #1 Q Go Girl (12-1) won her $75,000 maiden claiming debut from off the pace, and Brendan Walsh is sending out live runners here.

Comments: #6 Beau Recall (9-2) has been facing better graded turf route rivals in Southern California, and she won the Grade 2 Royal Heroine earlier this year. She is now trained by Cox and might run past them all. #7 Take These Chains (3-1) gives Cox a strong 1-2 punch. She went all the way in her first start after a long layoff Nov. 11, and her other three turf wins were from off the pace. #1 Prado’s Sweet Ride (6-1) is a consistent, versatile mare exiting a graded dirt route victory. The six-time turf winner landed the show in this event last year.

Comments: #3 Nun the Less (10-1) has run on the main track five times with three wins and a pair of runner-up finishes. Most recently, he earned competitive numbers at Churchill Downs Nov. 22. He should be finishing in a race with multiple early runners and his trainer has good stats with 30-plus day layoff runners. #7 Tom’s d’Etat (9-5) is a fragile 5-year-old with a 5-for-8 record. He cruised in his last three starts and easily won his lone local outing last year. He should be forwardly placed and is an obvious low odds threat. #5 Snapper Sinclair (8-1) set the pace and was clearly second best at Churchill Downs on Nov. 26, and winner Lone Rock returned to capture the Jeffrey A. Hawk Memorial Stakes at Remington Park on Dec. 16. He set the past and finished a nose behind Bravazo in the Grade 2 Risen Star at Fair Grounds earlier this year.

Comments: #8 Team Colors (8-1) got no pace help on yielding ground in the River City Handicap on Nov. 17. He ran well in his last three starts on firm turf and should get honest fractions to chase this time. He earned competitive numbers in his first start after the Joe Sharp claim on Oct. 12. #5 Big Changes (3-1) has five wins and a place finish in his last six starts. Florent Geroux is 3-for-3 with him. #1 Sir Dudley Digges (12-1) should save all of the ground from off the pace and has run fast enough to win a race like this multiple times.