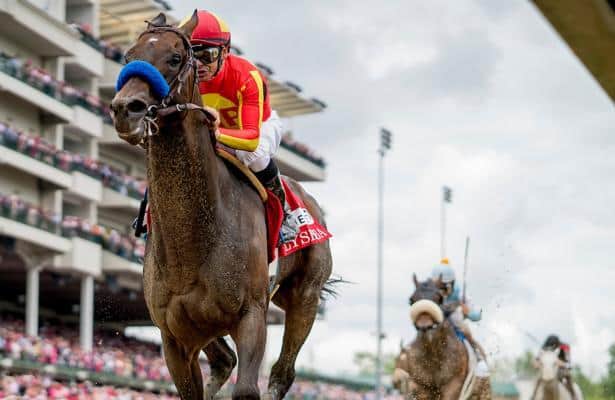 McKinzie has the opportunity to roll through Saturday's Grade 1, $300,000 Awesome Again Stakes on his way to favoritism in the Nov. 2 Breeders' Cup Classic, also at Santa Anita Park. But he'll have to face some familiar southern California handicappers along with the shipper, Seeking the Soul, when they head postward at 8:13 p.m. ET.

Here's how the Horse Racing Nation team handicapped the 1 1/8-mile race. And when coming to your own conclusions, check out free past performances.

Analysis: McKinzie is a four-time Grade 1 winner who has finished either first or second in 11 of 12 lifetime starts, including his last six races. He beat a far better group of rivals in the Whitney Stakes (G1) last time out than what he opposes here. A win locks him in the favorite’s role heading to the Breeders' Cup Classic. Higher Power vastly improved after landing in the John Sadler barn. His upset win by more than five lengths last out in the Pacific Classic (G1) earned him his lifetime best speed figure. It's possible this colt could regress following that huge number, but it's just as plausible he can further advance his form and win this event. Draft Pick is a consistent runner with seven consecutive in-the-money finishes. His best speed figures were his last two starts, most recently a runner-up finish in the Pacific Classic, preceded by a third-place effort in the San Diego Handicap (G2). He'll need to raise those numbers to beat the top two but certainly can land a share.

Analysis: McKinzie has been an exacta machine after twelve starts (seven wins and four runner-up finishes). He is sharp, fresh and versatile and looks just about impossible to deny in this spot. Draft Pick finished a good second from post 10 in the Pacific Classic. His numbers continue to rise, Saturday's shorter distance helps, and Joe Talamo rides him well. Higher Power (was excellent throughout in the Pacific Classic, but where did that come from? The lack of pace in this race helps his chances, and he might attempt a theft under Flavien Prat.

Analysis: I believe this race is playable only if you think there's a case to be made against McKinzie, so I'll try to make one. First, it has been more than two years since he won back-to-back races. Plus, the huge favorite hasn't raced here since before Santa Anita's safety issues resulted in a heavier track. Not that we know Higher Power will like it, but given how easily he handled his competition in the Pacific Classic, it might be worth trying a straight exacta with him on top. John Sadler's horses can run back to big races when given the sort of breaks Higher Power received.

Analysis: The heavy favorite McKinzie outclasses this field, making the Awesome Again difficult to bet. If it must be played vertically, bettors might want to take a shot with Higher Power, who turned in a career-best performance in winning the Pacific Classic. But it makes more sense to stick to horizontal wagers only with McKinzie as an "A" and Higher Power as a possible "B" before moving on.