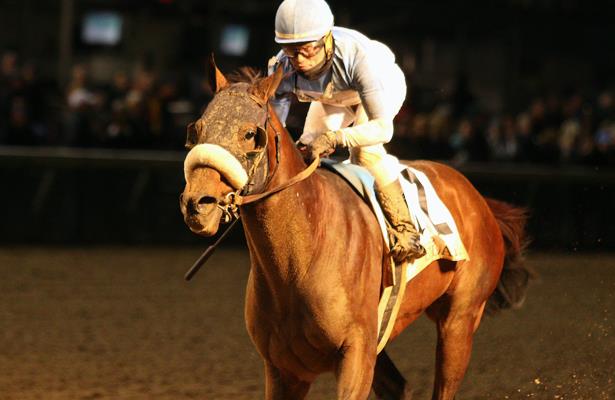 The 2020 Stephen Foster (G2) drew a strong field of eight for the penultimate day of racing for the abridged Spring Meet at Churchill Downs, which went without the Kentucky Derby and Kentucky Oaks due to the COVID-19 pandemic.

Tom’s d’Etat heads the field for the 39th renewal of the Foster, and the last time he tried the main track at Churchill Downs, he was victorious in the Grade 1 Clark. Finishing second in last year's Clark was fellow 2020 Foster contender Owendale, who comes into Saturday’s race off a solid stakes win in the Blame on this track last month.

Horse Racing Nation experts provide their choice of winners, horses to hit the board and longshots in the $500,000 Grade 2 Stephen Foster Stakes, slated for race 10 at Churchill Downs on Saturday with an approximate post time of 5:47 p.m. Eastern

Candice Curtis Winner: #6 By My Standards

Analysis: By My Standards comes into this race on a yearlong win streak, and I don't see it ending Saturday. He has the right style and tactical speed to sit off a likely modest pace set by Pirate's Punch and cruise home easily. Tom's d'Etat will also be tough here, but I think By My Standards will get the jump on him by being more forwardly-placed. Either way, those two should be on top of your tickets and in your multi-race wagers. Due to the pace scenario, I think Pirate's Punch can hang around for a piece of the board. Fearless, for Pletcher/Velazquez, may not go off at 12-1, but he'll still be a playable price.

Analysis: Even though Tom's d'Etat and By My Standards look best on paper, Owendale is the more interesting play based on price and his solid return win in the Blame Stakes. With Pirate's Punch, By My Standards and Silver Dust entered, there is enough pace for Owendale to show off his late punch again. If Fearless finds a way to tip outside in the clear, he can win too.

Analysis: Tom's d'Etat is the class, Owendale will make his run. Fearless is an up and comer. By My Standards will likely weaken in the stretch. Nick Costa

Winner: #6 By My Standards

Analysis: By My Standards only poor effort came in last year’s Kentucky Derby, a race that wasn’t indicative of his talents. He has won 5 of his last 6 races, including all three starts this year while looking really good. His Oaklawn Handicap win last out cemented his position as the top older horse in the nation. Look for By My Standards to stalk close to the pace and then overtake the leader. Pirate’s Punch is the only committed speed horse in the field, but was unable to display his quickness when he didn’t get a good trip from a wide draw last out at Oaklawn Park. Despite the trouble, he managed to finish third beaten less than one-length. Having an edge in the pace scenario makes him a dangerous contender. Tom’s d‘Etat is the lone Grade 1 winner in the field. He is riding a three-race win streak and overall has been very good over the course of his career and very consistent at Churchill Downs. Any one of his speed figures dating back to spring of 2019 is good enough to take this, but he is a deep closer who may not get the right pace setup. Jarrod Horak

Analysis: Owendale tuned up for this with a sharp off the pace score in the Blame Stakes. He won a pair of graded races at this distance last year. By My Standards has more upside than many of these. The improving 4-year-old colt is 3-for-3 this year, and his last two graded wins at this distance were strong. Tom’s d’Etat is a solid veteran with a versatile running style, and he is sharp and likes this distance. Fearless was forwardly placed in his first two wins, and earned strong late pace ratings in his last two starts from well off the pace. Wagers: #8 to win; exacta 8/5-6; exacta 5-6/8; trifecta 6-8/1-5-6-8/1-5-6-8

Analysis: It's a toss-up between Tom's d'Etat and Owendale for me in this one, so I'll take the one with higher perceived odds. I fully expect them to finish first and second, so an exacta box is in play, but don't expect a huge return. Pirate's Punch will lead the pack early and the pressing question will be whether the two favorites can catch this one. By My Standards is a very nice horse, and could hit the board here, but for the trifecta, I'll stick with Pirate's Punch at a decent price. He'll do all the hard work and could manage a minor award. Jeffrey Byrnes

Analysis: Tom's d'Etat is in the best form of his career at age 7. Winner of his last five, he won the Oaklawn Mile in his 2020 debut going away over Improbable, who came back to win the Hollywood Gold Cup his next start. He has won three times at Churchill Downs and has beaten many of these horses in the past. With a brisk pace in front of him,  he should sit mid pack and get a good run turning for home. His class can put him over the top. By My Standards has won three races in a row by a combined 10 lengths and seems to get better as the year goes on. His speed figures have increased every race and nine furlongs is his best distance. He posted back to back fast works and is ready to go. Owendale comes in off a sharp 2020 debut in the Blame Stakes, chasing down the leaders after being far off the pace, he has shown to get better as he matures, his second start off the layoff, he should be a more focused, and more alert runner. A good pace will be in front of him, so he should be flying late. Silver Dust should be close to the lead in the early going, and from post No. 7, could catch a flyer early on. He was a winner of the Mineshaft earlier this year, getting first run turning for home. I will play 5-6-8-7 superfecta.