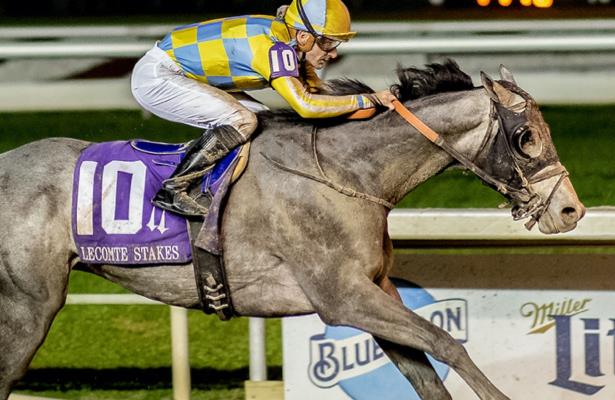 It's not often we get a 2020 Kentucky Derby prep race Lexington, Ky., in July. In fact, we never have before.

But on Saturday, as part of the truncated 5-day Summer Meet at Keeneland, the feature is the Blue Grass Stakes, a full field of 13 will line up to go nine furlongs on the dirt with Road to the Kentucky Derby points on the line.

Filly Swiss Skydiver already has enough points to secure a gate in the Kentucky Oaks, so trainer Kenny McPeek has her here against the boys and she's the morning line favorite to win.

Can she beat the dozen males in the Blue Grass? If not her, then who? Our experts give this question their best shot below. 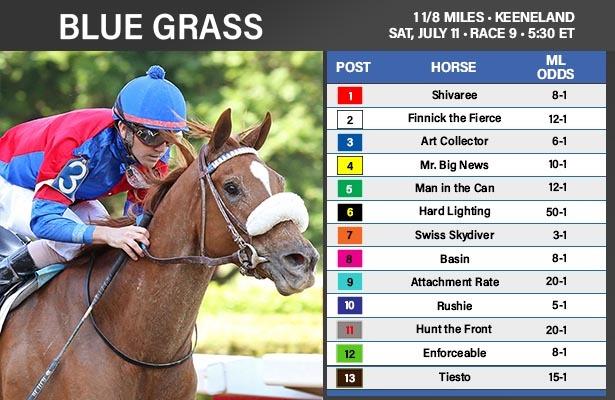 Winner: #10 Rushie
Hit the Board: #7 Swiss Skydiver, #8 Basin
Longshot: #12 Enforceable
Analysis: Rushie gets out of California and away from Honor A. P. and Authentic, and finds himself in a better spot today. Rushie was third in the Santa Anita Derby last out, but ran a 103 beyer number, which is faster than anyone else in this field. He has front end speed and sharp from the gate. Rushie posted a sharp 5F drill last week and appears ready to run his best. Swiss Skydiver is taking on the boys after three straight wins coast to coast. She has established herself as the best 3-year-old filly in the country, now she has a chance become the best 3-year-old period. Sharp from the gate, two of her last three wins have been wire to wire. Trainer Kenny McPeek deserves credit for trying her against the boys. Basin got off to a slow start this year, but seems to finding his stride as of late. If he gets a fast track Saturday, his odds go up big time. Should be mid pack early, and with good speed in front of him, he can get first run turning for home. Expect him coming late. Enforceable won the Lecomte Stakes at Fair Grounds back in January but hasn't won since, and he makes his first start in four months. He will be a late closer and need a lot of speed in front of him. His experience in graded stakes company puts him at a class edge. I will play a 10-7-8-12 superfecta.

Analysis: Mr. Big News is on the upswing with improving speed figures in each of his six starts, including a big effort from way off the pace in the slop at Oaklawn last race. He’s been away three months, but training well and his breeding is impeccable. Expect a big effort from this one. Art Collector gets a class rise after winning three in a row. In his last race, he was stretched out to two turns and pulled away impressively to win by 6 1/2 lengths over allowance foes. The runner-up (Shared Sense) came back to win the Indiana Derby. Enforceable has encountered slow starts and/or wide trips in several races. He’ll probably have to travel the overland route again from post 12, but he could be a factor late.

Analysis: ART COLLECTOR exits a key race where he handily defeated next out Indiana Derby winner SHARED SENSE. Has speed but has shown he can come from behind as well. He also sports the highest Beyer speed figure in the field and should love the nine furlong distance. The pick. RUSHIE was third last time out behind HONOR A. P. in the Santa Anita Derby, only beaten four lengths. If he repeats that effort he will be tough here. SWISS SKYDIVER certainly fits here on numbers alone, but she will have to contend with several entered here with early speed. If she can relax off of a hot pace she could be there at the finish. ENFORCEABLE has run well in several graded stakes and is worth a look as a viable longshot.

Analysis: Art Collector steps up after a trio of sharp victories vs. lesser. He controlled the pace and dusted Shared Sense June 13, and that one returned to capture the Indiana Derby. Rushie is making nice progress. He was best of the rest in third in the SA Derby, and 1-2 finishers Honor A. P. and Authentic would be strong favorites if they were entered in this spot. #12 Enforceable (10-1) is a late-running graded winner. The well-bred colt is proven at this distance and might be able to rally for a share. #13 Tiesto (15-1) showed nice late interest in three of four turf routes, and I figured they would try him on dirt at some point. The Country House team is reunited (Flavien Prat, Bill Mott, and LNJ Foxwoods). Wagers: #3 to win, exacta box 3-10, exacta 3-10/12-13, trifecta 3/ALL/12

Analysis: Art Collector's recent optional claiming win at Churchill Downs became flattered when Shared Sense took the Indiana Derby. In this spot, expect Art Collector to sit in a good tactical position right behind Shivaree and Swiss Skydiver on the lead. Once those two speed horses weaken each other, Art Collector will get first strike.

Analysis: There projects to be a swift, pressured pace in this race and while I respect the filly, Swiss Skydiver, I believe she will be under stiff challenge from the colts. Will set up for late runners - Enforceable is my play to jump back into the Derby picture after a productive winter at the Fair Grounds. Mr. Big News will also relish the pace setup and I'm playing him on the board, too. Finnick the Fierce tends to fill out Tris and Supers with his late run. Rushie also merits a look - he kept running into Nadal, Charlatan and Authentic while at SA. Is he as good out from their shadows? Worth a play at big odds.

Analysis: This is an incredibly deep and interesting race. My main opinion is to play against Swiss Skydiver as she's had some easier races and could be a much lower price than the 3-1 ML.

I really like Shivaree to run a big race from the rail and Basin to press from the outside, and I love Finnick the Fierce as a longshot to use in trifectas and superfectas.

The hard part was coming up with a winner. It feels like there's just going to be too much pace between Shivaree, Basin and Swiss Skydiver for any of them to hold on for the win. Originally I had Rushie, but now I'm thinking Art Collector will get the trip and the pace setup, which should be enough to run by Shivaree and Basin. He's just winning so easily and looks like he can win in a big field, even though he won in a four-horse field last time.

Analysis: I expect quite a pace meltdown here. Swiss Skydiver will get no favors, as Shivaree, Basin and even Man in the Can will be gunning early. Of the early-running types, only Basin is intriguing, but only underneath in exotics at best. The filly and the rail horse (and Can the Man) will be passed late after the early blistering pace. The horse best equipped to sit far off the pace and will be running hardest late is Enforceable. He’s the top pick, but Finnick the Fierce will employ a similar style, so he needs to be used on top of exotics. Rushie can pick up a piece underneath, but it’s Tiesto who should be completely forgotten at the windows and looks to sit a clean trip early. Wheel Enforceable and Finnick the Fierce on top of exactas over each other and Basin and Tiesto. Box them in a trifecta. Play a sizable win bet on Enforceable.