Expert: There will be no lack of pace in Breeders' Cup Classic 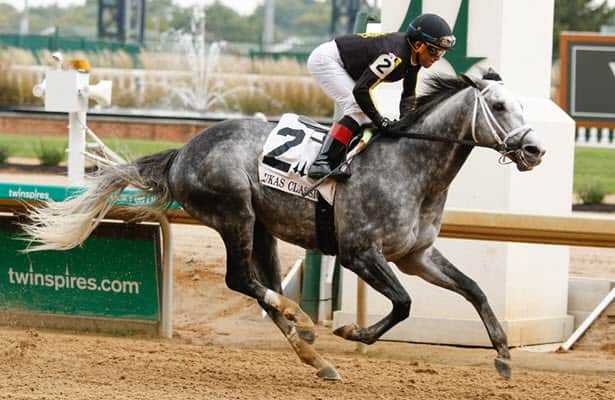 If everything holds together and all things being equal, one thing seems certain: The $6 million Breeders’ Cup Classic will not be lacking for pace.

With committed front-runners Medina Spirit, Knicks Go and Art Collector all pointing to the 1 1/4-mile Classic at Del Mar Nov. 6, Vegas books might ponder offering a prop bet on which one takes the lead, if they haven’t already.

Private clocker and bloodstock agent Gary Young, with an opinion usually at the ready on any racing question, was tactfully terse when asked for an analysis of the Classic, now less than two weeks hence.

“There’s speed in the race, but I don’t know if there’s Knicks Go-type of speed,” said Young, his vested interest aside since it was he who recommended owner Amr Zedan purchase Medina Spirit for the bargain price of $35,000 at last year’s Ocala 2-year-olds in training sale.

“Obviously, Medina’s a fast horse, and Hot Rod Charlie’s not a slow horse, but Knicks Go is a very fast horse. You couldn’t ask for Medina Spirit to be in better hands than Johnny V’s (regular rider John Velazquez).

“Medina Spirit ran well in the Sham against Life Is Good (second all the way, beaten three-quarters of a length in the one-mile race on Jan. 2), so I don’t think he needs the lead to run well.

“There are some who point out he’s 4-for-4 when he makes the lead, and gotten beat every time he doesn’t make the lead (in three races; he did lead after bobbling in the Preakness, eventually finishing third by 5 1/2 lengths).

“But I find it hard to believe a horse with his desire to win has to have the lead to do it. Usually, he’s fast enough to be in front.”

Asked if speed would benefit a proven stretch runner such as Essential Quality, Young said, “It all depends on how the pace plays out. I suppose the pace could be fast, but let’s not forget this:

“The only other time they ran the Breeders’ Cup at Del Mar (in 2017), Gun Runner, Collected and West Coast pretty much ran around there one, two, three (in the Classic). Medina Spirit seems to be doing very well, but we’ll see what happens.”

Addressing Horse of the Year, despite his affinity for Medina Spirit, Young feels that all but a vacuous effort by the brown or dark bay colt would warrant the prestigious award.

“But if he wins the race, I don’t know how you cannot vote him Horse of the Year, I really don’t.”