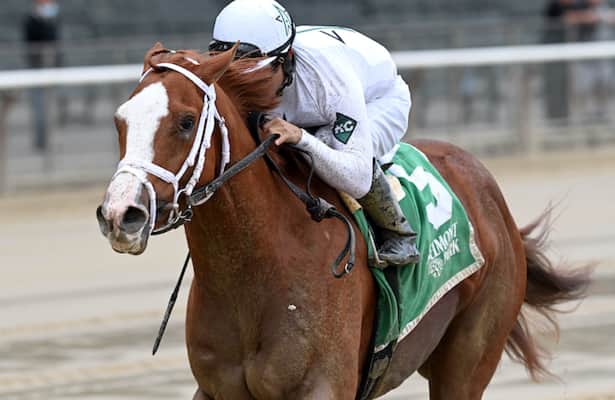 The Cigar Mile Handicap (G1) at Aqueduct on Saturday will feature a field of eight horses running for Grade 1 glory. Here is how the staff of Horse Racing Nation will be playing the race.

Get an Edge on Cigar Mile Day with Power Picks & Pro Reports!

On the board: #5 Independence Hall

Analysis: Americanrevolution is the fastest horse in the race AND gets in light, getting 4-5 pounds from logicals Independence Hall and Ginobili. That's a huge advantage and one that will attract my money at 2-to-1 or better. Our top pick is cutting back, and our live longshot, Olympiad, is stretching out. Irad Ortiz subs for the injured Rosario to add to the intrigue.

On the board: #1 Following Sea

Analysis: Blinkers have made a big difference for Ginóbili in his last three races. The rail draw may be a good place for Following Sea to use his early speed. Independence Hall may be the best of the rest. Going against state-breds in three victories makes me skeptical about Americanrevolution.

On the board: #1 Following Sea

Analysis: There isn't as much pace in this race as it would seem, and there's a chance that Following Sea gets away to an easy lead. Look for Americanrevolution to sit a couple lengths behind and then pounce. Code of Honor should put in a good run in his career finale, but let's try to get some value from Following Sea.

On the board: #4 Code of Honor

Analysis: Following Sea and Ginobili will set an honest pace with red-hot Luis Saez on Americanrevolution just behind. Saez will get the jump on other presser/midpack runners. I think it will be a brisk enough pace for Code of Honor to pick up a piece of the Trifecta. Independence Hall is the horse-for-course here, winning both stakes starts at Aqueduct a few years ago, and he has been on an upswing lately. Definitely use.

On the board: #5 Independence Hall

Analysis: Following Sea looked like a potential winner of the Breeders' Cup Sprint at the top of the stretch before being forced to steady. He was still beaten just a length and a half. As a Grade 2 winner and multiple Grade 1-placed, he's the class of a deep and talented field. We'll look for him to go early from the inside stall and run them off their feet.

On the board: #3 Americanrevolution

Analysis: Ginobili won sharply at a mile three starts back and then, after a Pat O'Brien Stakes (G2) score, was best of the rest behind Life Is Good in the Breeders' Cup Dirt Mile. There are some talented horses in this race, but no freakish runners on the level of Life Is Good. There also are not many need-the-lead types, so Ginobili could find himself out front and able to dictate the pace.