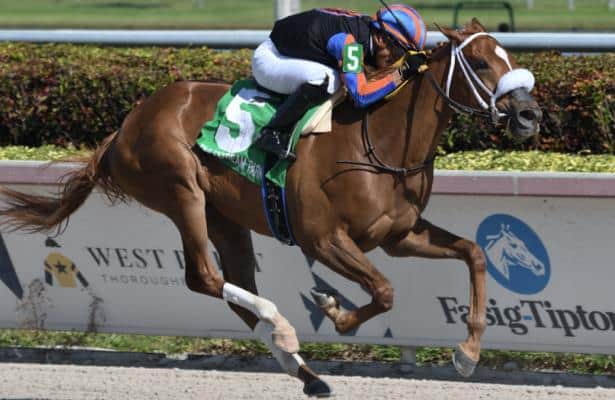 Slam Dunk Racing, Legacy Ranch Inc. and Doug Branham’s Tonalist’s Shape, undefeated through three starts, takes another step up the ladder as she puts her perfect record on the line in Saturday’s Grade 3, $150,000 Forward Gal at Gulfstream Park.

The 40th running of the seven-furlong Forward Gal for fillies is among five stakes for 3-year-olds, four graded, worth $750,000 in purses on a 12-race program highlighted by the Holy Bull (G3) on the Kentucky Derby trail.

Tonalist’s Shape, a chestnut daughter of 2014 Belmont Stakes winner Tonalist, has progressed steadily in distance and competition since capturing her debut, a 5 ½-furlong maiden special weight sprint Sept. 28 at Gulfstream.

In her next start, she came from off the pace again to win a 6 ½-furlong optional claiming allowance by 2 ¾ lengths Oct. 20 at Gulfstream Park West. Back at Gulfstream, she was never far from the lead making her stakes debut in the one-mile Hut Hut Nov. 30 and drew away to win by nine lengths.

It was that kind of potential that prompted her owners to purchase Tonalist’s Shape following her debut and turn her over to Joseph, who has already won five stakes at the Championship Meet and ranked in the top three among all trainers in wins.

“She was very impressive and came from way out of it and galloped out strong, and that’s why the owners bought her. Thankfully they gave her to us and since we’ve got her in the barn she’s been great,” Joseph said. “She’s an average work horse but on race day, she’s different. The last race, she made a believer out of us.”

Tonalist’s Shape has worked five times at Gulfstream for her seasonal debut, including a half-mile in 47.49 seconds Jan. 19 that ranked fourth among 70 horses, and a five-furlong breeze in company Jan. 26, where she went in 1:01.65. Meet-leading rider Irad Ortiz Jr. has the call from far outside Post 6 at topweight of 122 pounds.

“She’s not an overly zealous work horse, but last time we gave her a little target and put her like a length and a half behind, and she ran by the target readily and galloped out strong,” Joseph said. “I think everything’s in place for her to run a big race.”

Her connections are hoping Tonalist’s Shape will run big enough to remain on target for the May 1 Kentucky Oaks. Following the Forward Gal, Gulfstream’s series for 3-year-old fillies continues with the Davona Dale (G2) on Feb. 29 and Gulfstream Park Oaks (G2) on March 28.

“She’s improved each race as the distances have gotten longer and she’s going to get better as she goes longer. I know we’re cutting back in distance a little bit, but she got a little break after her last race,” Joseph said “The timing just worked out to give her a little break to set her back up for the series here, hopefully the Davona Dale and the Gulfstream Oaks and then the Kentucky Oaks.”

Trainer Ian Wilkes has similar long-range goals for Lothenbach Stables Inc.’s Street of Dreams, a bay daughter of 2007 Kentucky Derby winner Street Sense, who Wilkes developed while working as an assistant for Hall of Famer trainer Carl Nafzger. Street of Dreams exits a front-running maiden special weight triumph in the slop Nov. 30 in her second career start, both under Chris Landeros, who retains the mount from Post 4.

“It was a good race. They ran fast, so she had to keep going,” Wilkes said. “I left it up to Chris. If he broke good, then go on with it. It was a muddy track that day. There were no instructions. I just left it to him to find his way.

“She won and then we came down here and I watched her train. We want to see if she’s good enough to take us to the Oaks,” he added. “I’ve been very pleased with her. I thought her last work was very good, and I don’t see any reason not to run her.”

Purchased for $150,000 as a 2-year-old in training last spring during Fasig-Tipton’s Midlantic auction at the Maryland State Fairgrounds in Timonium, Street of Dreams shows three works at Palm Meadows, Gulfstream’s satellite training facility in Palm Beach County, since her arrival earlier this month. Her most recent, a five-furlong breeze in 1:01.40 Jan. 26, was the fourth-fastest of 20 horses.

“She’s a very talented filly,” Wilkes said. “It’s not do-or-die and you have to win, but I expect her to run good. She’s talented, and that helps. She’s a very nice filly and I think she’ll just get better from each race.”